After cracked retina, Francisco Rivera attempts to put eye scare behind him 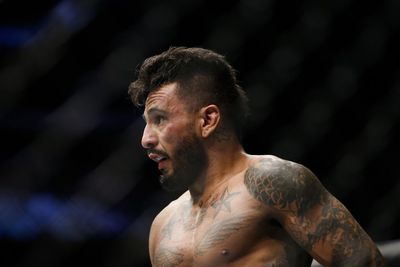 Francisco Rivera was en route to one of the best performances of his life against his toughest opponent. After a very close first round, one in which many thought Rivera won, Urijah Faber put an open hand out to get distance as Rivera feinted.

As Faber’s hand extended, one of his fingers poked Rivera deep in his left eye. Rivera was immediately blinded in both eyes and staggered. Referee Mario Yamasaki didn’t see it and Faber capitalized with a flurry against the cage and a choke that finished the fight.

The whole scene at UFC 181 last December went by so fast, Rivera says now. He was completely frozen by the poke and then terrified of what kind of damage had been done.

“I was scared,” Rivera said. “When it happened, I didn’t know what eye he poked. That’s what it felt like. It felt like his whole hand went in both my eyes. If anybody has gotten poked in the eye, it’s not a good feeling. You can’t really just fight with one eye open the whole time. You can’t be in a fight without your eyes. I just didn’t know what was going on. I didn’t know if it was the ref in front of me or Faber. Next thing you know I was getting choked out. It sucks.”

Rivera (10-4, 1 NC) makes his return after six months against Alex Caceres at UFC Fight Night: Henderson vs. Boetsch on Saturday night in New Orleans. The Orange County, Calif., native needed laser surgery to repair a cracked retina. The entire ordeal was tough on him. Initially, Rivera didn’t just fear he would never fight again — there was a possibility he would be blinded in one eye.

“It was pretty intense when it happened,” Rivera said. “I was hoping it wasn’t as bad it looked. I was hoping it just looked really bad. I didn’t want to have a Michael Bisping torn retina or something where I could never fight again. It’s scary, especially with the eye.”

Rivera, 33, appealed the result of the fight with the Nevada Athletic Commission (NAC), but lost the battle in February when the NAC determined that it didn’t have the jurisdiction to reverse it. In order for a fight to be a no contest in that situation, the eye poke would have had to actually ended the fight directly. Instead, Faber used a choke to finish Rivera. Yamasaki just missed the poke.

Rivera was bummed that the appeal didn’t work out. He also asked UFC matchmaker Sean Shelby for a rematch with Faber, but that didn’t pan out, either.

Rivera has to settle for Caceres (10-7, 1 NC) and that isn’t a bad deal. “Bruce Leeroy” is a fairly well-known name who had his own success against Faber last year. Rivera has lost two in a row on paper, including a unanimous decision to Takeya Mizugaki in May 2014, but remains ranked No. 11 among bantamweight contenders.

Most importantly, Rivera’s eye is feeling fine. He thought he would feel something during training camp, maybe see spots when he was hit. But that didn’t happen. After getting cleared twice by doctors, Rivera is 100 percent and ready to get back to executing his come-forward style.

“It’s hard to tell what’s gonna happen, but I’m definitely confident,” Rivera said. “I’m definitely gonna go in there and do what I do best, which is fight. Everybody knows when I step in the cage, I come to fight. I don’t come to do anything else.”

He had a bad break in his last fight, but in a way he was lucky. Rivera could be in much worse shape six months after a bad eye injury than he is now.