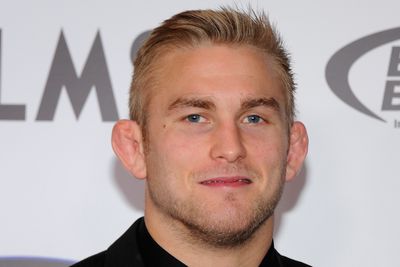 UFC light heavyweight title challenger Alexander Gustafsson’s loss to Anthony Johnson was so devastating to him that he considered quitting the sport entirely.

Alexander Gustafsson is getting the next UFC light heavyweight title shot despite coming off a loss in one of the most important fights of his career. The Swedish fighter took on Anthony Johnson in a stadium in his home country – and was stopped in the first round. In a conversation with MMA Junkie, he spoke about how devastating that loss was to him. It was actually so bad that he considered quitting the sport entirely.

“It was really bad. I lost fights before, but this fight was the fight I couldn’t lose.

“I was supposed to win this fight, but I didn’t. I was thinking about that, to quit the sport. I was really depressed after the fight.”

“It was a really bad blow for me – for my career and my personal life,. It was a tough hit to take. The fight I couldn’t lose, I actually lost.”

He stated that there were people there to support him, and incidents like this helped him to see who was really had his back:

“It was pretty bad, but now I’m here. I’ve got my family. I’ve got my friends, my teammates. I’ve got real support, and now I’m back and feeling great – better than ever, actually.”

Gustafsson has already had one crack at the title, but came up just short against Jon Jones. As everyone knows by now, Jones has been stripped of the title and Daniel Cormier, who defeated Johnson at UFC 187, is the champ. Gustafsson has expressed surprise that he is the one getting this next title shot (rumored to be at UFC 191 in September, though that hasn’t bee confirmed), but he said his mindset has taken a 180-degree turn and he’s enjoying himself once again:

“I’m just a happy guy right now. Everything is fun. Training is fun. Doing everything that comes with MMA is fun right now. So I’m just enjoying my time.”

“I just see this as a second chance, as an opportunity for me. I won’t even go into why it happened or why I should fight him. I’m just enjoying my time.

“I just know that I got a second chance, and I will do the best that I can and show everybody that I can be the best guy in the world.”