Anderson Silva expected to return to training in six to nine months, already asking surgeons: ‘When can I train?’ 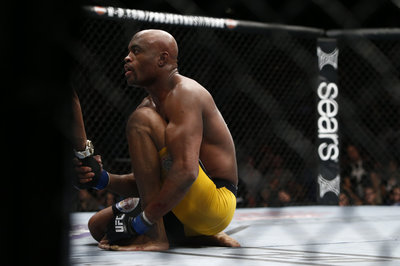 Anderson Silva’s gruesome leg injury may have ended UFC 168 on a disastrous note. But according to the doctor who operated on Silva late Saturday night, the former UFC middleweight champion’s future isn’t nearly as bleak as many observers initially believed.

“The minute I saw it and recognized it, I knew it was fixable,” Dr. Steven Sanders, an orthopedic surgeon for the UFC, said Monday.

“We are not even 48 hours from the surgery, and tibia fractures, though we can get them to heal, can have slower healing. So in general, my prognosis would be a fracture healing somewhere in the nature of three to six months. But there’s also soft tissue components that have to heal, and then of course a rehabilitative process as well.”

Following the injury, Silva’s leg was stabilized inside the Octagon by Dr. Anthony Ruggeroli, “who immediately realigned the limb and applied traction.” Silva was then transported to a local hospital, where he underwent successful emergency surgery.

Sanders anticipates that if all goes as planed, Silva will be able to return to training within six to nine months — which is a good thing, considering that the question was apparently one of the first things on the former champ’s mind Saturday night.

“In the pre-op area, his questions were, ‘When can I train?'” Sanders said.

Silva suffered the injury when Chris Weidman checked a leg kick midway through the second round of the pair’s main event rematch at UFC 168. The inside of Weidman’s left knee collided with Silva’s shin, instantly snapping the bone and twisting Silva’s shin into a macabre ‘C.’

“In terms of the severity of the injury, it was, I would say, fairly severe,” Sanders said. Nonetheless Sanders later added that for however grisly Silva’s injury may have been, it was “extremely close” to being much worse.

“Fortunately for Anderson, the skin did not break,” Sanders said. “But where could an injury like that go? An injury like that could go where, as I mentioned, the skin breaks, and now you’ve got this exposed bone in the environment of an Octagon, and so his risk of infection goes up meteorically. He could have also twisted in such a different direction where he could’ve potentially lacerated an artery going to the foot, in which case you now have what we call vascular compromise. He could’ve, in that case, potentially needed a vascular reconstructive procedure to reattach an artery.

“Injuries like this can, at times, even be limb threatening. If the fracture is severe enough, if it compromises vascular supply to the feet and vascular supply cannot be reestablished, it can result in an amputation.”

Initial speculation after witnessing the 38-year-old fall victim to such a gruesome injury was that Silva’s career had come to an end. Sanders, however, noted that due to the nature of the injury, Silva’s age will not play a role in recovery. Sanders also saw very little evidence that Silva’s leg had been damaged prior to the break.

In addition, once the fracture is healed, Sanders expects the leg to return to full strength, and due a titanium rod doctors surgically inserted into Silva’s left tibia, to not be at risk for further damage.

“In this particular case, you had a bad fracture occur. Fortunately it occurred outside the joints,” Sanders said.

Silva’s right leg is currently encased in a posterior splint. Sanders expects that within a few weeks, Silva will begin being able to put increased pressure on his leg.

Once both the fracture and soft tissue heal, Silva will begin a steady rehabilitation process, which Sanders expects will “not need to be as intense as we generally talk about when fighters injure ligaments, say, in the knee — so the expectation is positive.

“He is using crutches. We also have a walker available for him,” Sanders added.

“We’ve made both available to him. And again, I always mention that he’s only 48 hours, less than 48 hours, from a devastating injury. I have seen him up on crutches — and it’s amazing, because I don’t know if I would be able to do it that quickly.”