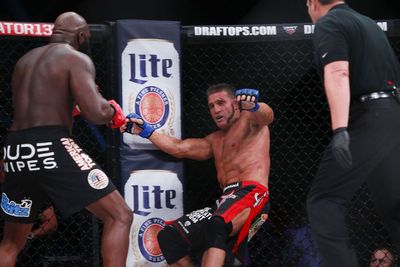 A whopping 2.1 million fight fans were nestled in front of their televisions to watch former YouTube street-fighting sensation Kimbo Slice knockout UFC Hall of Famer Ken Shamrock in the main event, setting the all-time high water mark for a Bellator fight card on the cable network.

These numbers trump the previous record at Bellator 131, which drew 1.2 million viewers and 1.8 eyeballs for the main event between Tito Ortiz and Stephan Bonnar. In fact, Bellator 138 was the No. 1 show in all of television in the 18-49 demographic, proving once again that recognizable names will draw a high ratings number.

Bellator also announced last Friday that it will revive the “Dynamite” brand, putting on a mixed martial arts (MMA) /kickboxing hybrid event with both a ring and a cage inside SAP Center in San Jose, Calif., on Sept. 19, 2015. Tito Ortiz will take on Light Heavyweight Champion Liam McGeary in the main event, with a four-man 205-pound tournament, as well as Joe Schilling and Paul Daley participating in kickboxing fights.

The Coker-era of Bellator seems to be sticking to a formula of placing a recognizable name in the main event with the idea that casual fans will see the other talent on the roster on the remainder of the card.