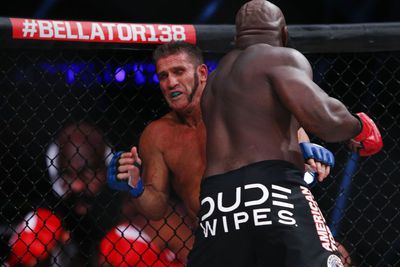 On Friday night, UFC hall of famer Ken Shamrock took on street fighting legend Kimbo Slice in the main event of Bellator 138. Kimbo Slice overcame adversity in the opening minutes as he somehow defended a rear naked choke that seemed fully locked in by Shamrock and knocked him out soon after.

What was the high point of the fight?

Finding a high point in this fight is a struggle, there were clear low points like Ken Shamrock, a noted grappler, somehow being unable to finish a rear naked choke against a guy with limited grappling experience. The only real high point was Kimbo’s barrage of punches that forced Big John McCarthy to stop the fight.

Where do these two go from here?

It will be interesting to see if Kimbo continues to fight inside the cage. If he does a few names stand out as potential opponents, the first would be a rematch with James Thompson and the second would be a match-up with Bobby Lashley, which would be highly marketable, but also a little sadistic given the take down defence displayed by Slice on Saturday night.

Never, this fight was pretty bad throughout.