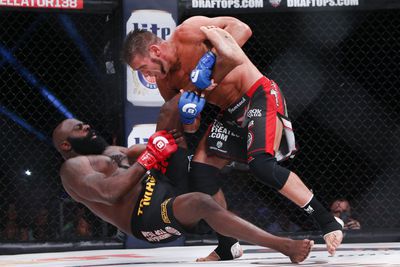 The heavily criticized Kimbo Slice vs. Ken Shamrock main event on Friday night set Bellator’s all-time record with 1.58 million viewers on average for the three-hour presentation, with the main event doing 2.1 million over the 15-minute presentation.

For those who put their money on the side of record ratings for a sloppy fight, you’d be the big winner for Friday night’s Bellator show.

The promotion broke its all-time viewership record for Bellator 138, the Kimbo Slice vs. Ken Shamrock-led card, doing 1.58 million viewers on average for the three-hour presentation from the Scottrade Center in St. Louis. The highest quarter hour was the main event, which did 2.1 million viewers.

Spike was almost the highest rated network on cable in both Men 18-49 and Adults 18-49 during the three hours, and doubled FOX’s coverage of the U.S. Open Golf tournament in the Male 18-49 demo in the same time slot.

The number beat the previous record by 27 percent, beating the promotion’s old record of 1.24 million viewers on average for the Nov. 15 show that was headlined by Tito Ortiz vs. Stephan Bonnar. The Ortiz vs. Bonnar main event did 1.84 million viewers for the peak quarter hour.

The number was impressive because it was a Friday, which is usually not as good a night for combat sports as Saturday. Also, the main event only lasted 2:22 before Slice won via knockout, so most of the peak quarter hour included the build-up, intros and post-match interviews, and the fight itself is likely to end up a higher number.

The main event, expected to be the peak period of the show, didn’t have as much time to build an audience as Ortiz vs. Bonnar, which went three rounds.

While the numbers are nowhere close to what Slice did in his heyday on CBS, or Shamrock did with Tito Ortiz in 2005 on Spike for their television match, it was the second highest numbers of the year on cable, beating every UFC event with the exception of the Jan. 17 FOX Sports 1 broadcast of the Conor McGregor vs. Dennis Siver fight, which did 2.75 million viewers.