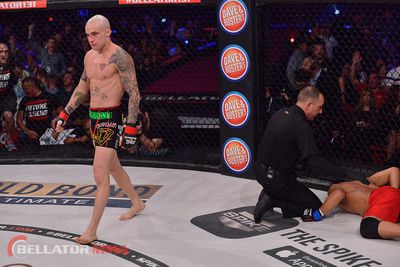 Not only was Mike Richman significantly overweight for his last fight, he also was allegedly on performance-enhancing drugs.

Richman tested positive for a banned substance on the night he fought Eduardo Dantas in the co-main event of Bellator 137 on May 15 at Pechanga Resort and Casino in Temecula, Calif., California State Athletic Commission executive officer Andy Foster confirmed with MMAFighting.com on Tuesday.

Foster is not legally able to say what substance was found in Richman’s drug screen, but Bellator confirmed it was a performance-enhancing drug. Foster said Richman will be hit with a two-year suspension and the maximum $2,500 fine. Richman will have the right to appeal.

Richman (18-6) was more than three pounds over the 136-pound bantamweight maximum the day before Bellator 137. The fight was nearly called off until Dantas eventually agreed to take the fight. Dantas, the former Bellator bantamweight champion, ended up beating Richman by unanimous decision.

Richman, 29, was coming off two straight wins, including a highlight-reel knockout of Nam Phan at Bellator 131 last November. The Minnesota native is a former United States Marine.

Fernando Gonzalez also came back positive from Bellator 137, but Bellator said it was just for marijuana. It was Gonzalez’s second offense and Foster said he would be fined $1,500.

“Andy Foster of the California State Athletic Commission has notified us of two positive tests following Bellator 137, Mike Richman for PEDs and Fernando Gonzalez for Marijuana,” Bellator said in a statement. “We’ve been informed that these fighters will be subject to suspensions and fines. We here at Bellator stand behind the commission 100 percent in this process and remain committed to keeping MMA clean of substance abuse.”

In regards to my positive test results for an Anabolic Steroid. I want to say that I lost the integrity in myself and the integrity of this sport. I will not sit here and deny that I took it or act like I didn’t know what I was taking or blame it on someone else. I am a cheat, plan and simple and there is no excuse or reason that is valid enough to dispute the reasons why I cheated the sport and myself by using it. I want to apologize to Bellator MMA for my actions. I want to apologize again to my hard working Teammates who are not cutting corners and busting their asses off everyday in the gym to better themselves. I want to apologize to My head MMA coach Greg Nelson for making him and his gym the Academy look bad. He had no knowledge of me using at all. I want to make the same apology to my S&C coach Matt Miller of Horsepower strength and conditioning, he also had no knowledge of my use of this Anabolic Steroid. I apologize to all my sponsors that support me, my family that loves me, and my friends and fans that cheer for me. I deserve every bit of backlash and hate I’m going to receive from the media and the fans of this great sport. I take full responsibility in my actions and the decisions I made. I also deserve the punishment the CA state athletic commission brought down upon me.