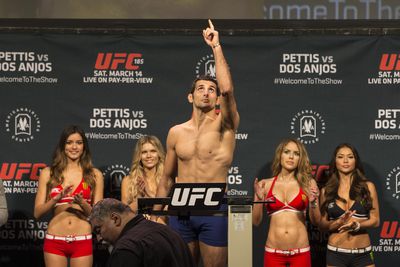 Beneil Dariush faces Michael Johnson at UFC Fight Night 73, and that could be his last fight at 155 pounds.

Riding a four-fight winning streak in the UFC, including victories over longtime veteran Jim Miller and a submission over Daron Cruickshank, Dariush could be heading to the welterweight division to avoid a fight with training partner and UFC lightweight champion Rafael dos Anjos.

“When he gets to the top 5 of the lightweight division, he will go to 170 pounds,” Kings MMA leader Rafael Cordeiro told MMAFighting.com. “He’s fighting at the same division as Rafael, but he will go to 170 when he becomes a top 5. He will give welterweight a lot of trouble.”

Dariush is currently ranked at No. 14 in the lightweight division, but could jump up the rankings with a win over No. 6 Johnson on Aug. 8. Cordeiro, who also trains heavyweight champion Fabricio Werdum, says that fighting at 170 pounds wouldn’t be an issue for Dariush.