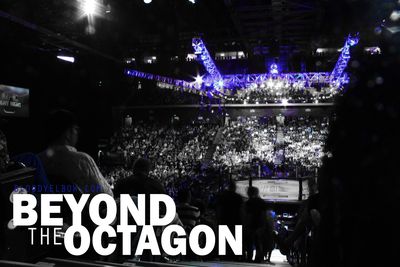 In this week’s BtO, TUF 10 rep Darrill Schoonover takes on TUF 13 assistant coach Lew Polley. That, plus your regular report on what former fighters from the UFC, PRIDE, and others have been up to on the regional circuit.

Another weekend brings another selection of big-show alumni looking to reestablish themselves in MMA’s smaller shows. First, though, some catch up from last week…

On Monday the 15th, in Romania, super-heavyweight Alexandru Lungu (11-3, 0-1 PRIDE) made short work of late replacement Andrzej Kulik (0-1-0, 1NC), knocking him out two minutes into Round 1. Lungu, who knocked out “Mighty Mo” Siala Siliga last December, was originally meant to face Jeff Monson, but Monson could not be medically cleared (likely due to the knockout loss he suffered just this month). Lungu is 2-1 since 2014.

As for this past weekend, we kick things off with Friday’s Midwest Cage Championship in Des Moines, Iowa, where T.J. O’Brien (20-8, 0-2 UFC, 0-1 WSOF) challenged promotional champion Eric Howser (9-2, 1-0 Bellator) for his featherweight title. O’Brien, who submitted fellow UFC castaway Jacob Volkmann last year, would be unable to overcome local favorite Howser. The UFC veteran was shocked with a knockout blow 12 seconds into the opening round, thus bringing his post-Octagon record to 4-3-0. Howser has won eight straight.

In the co-main event, Elvis Mutapcic (15-3, 1-1 WSOF) made predictably short work of Sean Huffman (19-32-0, 1NC) handing the journeyman his fourteenth straight loss in the form of a first-round TKO.

Also on the card was TUF 18 rep Tim Gorman (10-4, 0-2 UFC), taking his first fight since being released from the UFC last November. Gorman was badly cut early in his bout with Justin Morrison (8-7-0) but would go on to tie up a fight-ending rear-naked choke in Round 2.

And on Thursday, at the Thunder Fight 4 in Sao Paolo, Jorge Patino (38-15-2, 1-1 WSOF, 0-1 Strikeforce 0-1 PRIDE, 0-1 UFC) captured the vacant Thunder Fight lightweight title with his unanimous decision victory over Celso Venicius. Patino, who challenged Pat Miletich for the UFC welterweight title in 1999, has won three straight. As for Venicius, he suffers his first career loss, falling to 5-1-0.

Meanwhile, in North Carolina, TUF 10’s Darrill Schoonover (14-7, 0-1 UFC) squared off with TUF 13 assistant coach Lew Polley (12-7, 1-0 Bellator, 0-1 IFL) in the co-main event of NLFC 2. Schoonover and Polley both experienced dubious notoriety thanks to their respective stints on reality TV: Schoonover saw the nickname “Titties” forced into usage by season coach Quinton Jackson, while Polley was kicked off the show by head coach Junior Dos Santos following persistent disagreements with the team. In this battle of TUF oddballs, Schoonover would wind up coming out ahead, if barely, as he walked away with a split-decision victory. The win pulls him out of a two-fight skid. Polley drops his third-straight contest. He hasn’t had his hand raised since his 2012 win over former UFC fighter Carmelo Marrero.

And in Hiroshima last Sunday, at Shooto Graplingman 15, Rambaa Somdet (13-3-0) looked to put himself back in the win column at the expense of Masayoshi Kato (8-7-1). Somdet, a long-ranked flyweight who served Shooto’s inaugural 125-pound champion, returned from injury late last year only to see his years-long unbeaten streak come to a close following a split-decision loss. He’d right ship on Sunday, though, earning the judges’ verdict after three rounds. Kato, meanwhile, is nicknamed “Macho the Butterfly.”

And at Vale Tudo Japan in Osaka, brawler Yoshiro Maeda (32-15-5, 2-5 Dream, 1-2 WEC, 0-2 PRIDE) won his second straight bout thanks to a unanimous decision over Kentaro Watanabe (10-7-0). It’s a welcome departure from the 0-4-1 stretch Maeda endured between 2012 and 2014. It’ll be interesting to see if Maeda can make it three in a row–it’s been over seven years since he last managed more than two consecutive victories.