Cain Velasquez on only having two weeks to adjust to altitude: ‘Maybe that wasn’t enough’ 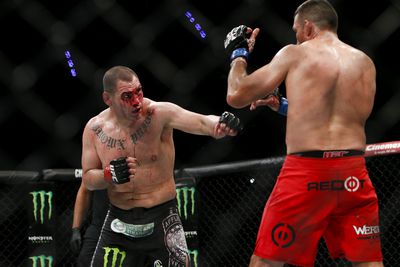 The man the UFC billed as “Cardio Cain” was gassed after the first round.

The Cain Velasquez that lost his heavyweight title to Fabricio Werdum in the main event of UFC 188 on Saturday night was not the same Velasquez that UFC fans have watched steamroll past opponents. There are multiple explanations for that — starting with the altitude in Mexico City and finishing with Velasquez’s 20-month layoff.

Werdum’s heart and skill cannot go ignored. But Velasquez (13-2) simply was not himself. Or at least not his old self.

In the post-fight press conference, the Mexican-American former champion admitted that coming to Mexico City, with its elevation of 7,382, just two weeks out from the fight might have been a bad idea.

Werdum (20-5-1) had spent more than a month in Mexico at altitude, which is also what he did before beating Mark Hunt in the UFC 180 main event last November. In that fight, Werdum was supposed to challenge Velasquez, but Velasquez withdrew three weeks before the potential bout due to a knee injury. The UFC put the interim heavyweight title up for grabs and Werdum earned it with a second-round knockout of Hunt.

On Saturday, Werdum used a guillotine choke to finish a gassed Velasquez in the third round. “Vai Cavalo,” who has won six in a row, lit up Velasquez on the feet in the second and third rounds. When Velasquez shot in out of desperation, Werdum, the crafty jiu-jitsu player, had him.

“We didn’t not want to go to the ground with him,” Velasquez said. “We knew that if we fought everywhere we’d have to do that. We’re not one-sided anymore. We go to the ground and we fight there. I was ready to do that. Going in for a double leg, he caught my neck. I had my head way on the outside. That was my fault. Again, you live and you learn.”

Velasquez, 32, pushed the relentless pace he’s known for in the first round. That started to taper at the end with Werdum gaining momentum. On most nights, Velasquez seems like he can keep up that level of energy for five rounds — he did it twice against Junior dos Santos. But it didn’t happen that way this time.

“He didn’t surprise me,” Velasquez said. “I’ve seen his film before. I know how he fights; he fights very good. Tonight he fought very good. He won tonight.”

Velasquez had not fought since October 2013, the second victory over dos Santos at UFC 166 in Houston. He needed shoulder surgery after that and then injured his MCL before what would have been the fight against Werdum last November. UFC president Dana White said that being away that long must have played a factor.

“There’s been guys who’ve proved me wrong with my ring rust theory, but 99.9 percent of the time, layoff of almost two years you’re gonna have ring rust,” he said. “And a layoff and you come into this altitude, it’s tough, man. It’s tough.

“Cain is well known for his cardio. That’s like his thing. But you’re gonna have rust. He still looked good. I mean, Jesus Christ. The guy was standing toe to toe for the first two rounds and they were just blasting each other. Then he started chopping Werdum’s leg. Werdum did a really good job conserving his energy, not moving around too much, standing still. He ended up out-cardioing the cardio king.”

Velasquez has tasted defeat before. Dos Santos knocked him out in just 64 seconds back in 2011. That was the first-ever UFC show on FOX. This was an important moment in Mexico City, the place he most wanted to fight in his career.

After that first loss, Velasquez came back and dominated dos Santos twice. It’s clear he’ll have the same thing on his mind moving forward. Maybe he already does.

“It felt the same way definitely with the fight against dos Santos,” Velasquez said. “Same kind of feelings. The plan is always to come back to training and get better. That’s what we have to do. Keep that hunger. That’s the plan.”