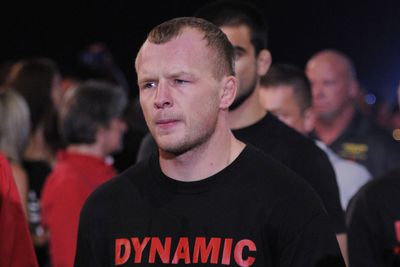 In keeping with the recent sea change in MMA drug testing, the California Athletic Commission (CSAC) has handed down what could be a career ending punishment to Alexander Shlemenko for his failed drug test.

He may not be done fighting entirely, but he’s probably done fighting in the US. That seems to be the likely fallout from the latest news in Alexander Shlemenko’s drug test failure odyssey. Shlemenko failed his drug test from Bellator 133, back in February, when he dusted Melvin Manhoef. Apparently the results of the drug test showed that Shlemenko had a 50/1 T/E ratio and tested positive for Oxandrolone and synthetic testosterone. Before his CSAC hearing today, officials said that they would be pushing for a 2-3 year suspension for Shlemenko.

It appears they decided to go on the high side of that:

Alexander Shlemenko has been suspended for three years and fined $10,000 by the California State Athletic Commission. Unanimous.

Three years probably kills what’s left of Shlemenko’s career, already 11 years in. But considering that he can probably go back to Russia and get booked for fights, I would be surprised if it’s the last time we see Shlemenko in a cage. Shlemenko has also said that he wants to appeal the decision, as there was no B sample tested and no recourse for him to prove that he wasn’t on PEDs. But, considering that’s a case he made during this hearing, it’s hard to see how far that’d take him in an appeal.