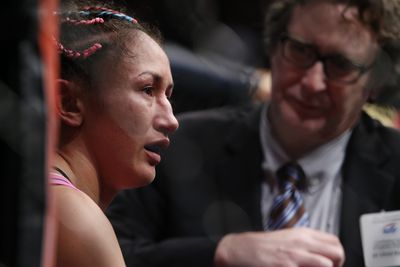 Carla Esparza has experienced the highest highs and lowest lows of being an MMA fighter in just 12 months.

Last year, Esparza won The Ultimate Fighter 20 and became the first-ever UFC women’s strawweight champion. Then, at UFC 185 in March, she was knocked out by Joanna Jedrzejczyk in the second round. Now? “Cookie Monster” is announcing she needs shoulder surgery and she’ll be out six to eight months. FOX Sports was the first to report the news.

Esparza (10-3) is still one of the very best 115-pound women’s fighters in the world and a former Invicta FC champion in the weight class. She was the favorite heading into the bout with Jedrzejczyk and many thought her wrestling ability would get the job done. Esparza, 27, has said that she was essentially mentally exhausted after being on the reality show, promoting it and winning the title in the span of six months before taking the fight with Jedrzejczyk.

I will be undergoing surgery as a result of a shoulder injury from my last fight. I will be out6-8months. http://t.co/1gtL5dS6y4

When she gets back, the growing division could look very different. Jedrzejczyk just beat Jessica Penne by third-round TKO on Saturday in Berlin. She’s likely to get the winner of a UFC 190 bout between Claudia Gadelha and Jessica Aguilar on Aug. 1 in Rio de Janeiro.

Esparza has history with both Gadelha and Aguilar. She was supposed to fight Gadelha in her final Invicta bout in 2013, but Gadelha had a tough weight cut and was deemed medically unfit to compete after weigh-ins. Afterward, the two women had a war of words on social media. Esparza has also accused Aguilar of performance-enhancing drug use.

The loser of that fight at UFC 190 could be a logical next opponent for the former champion. However, it doesn’t seem like she’ll be ready to return to the Octagon until the beginning of 2016.