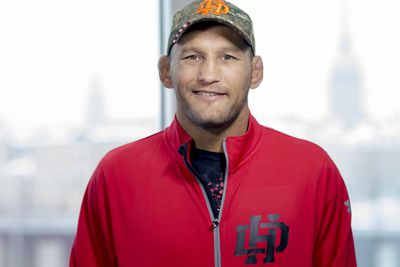 It’s crazy what a 28-second win can do for your options.

At 44 years old, Dan Henderson escaped his latest round of retirement talks when he blasted through Tim Boetsch at UFC Fight Night 68 in early June. “Hendo” knocked out the veteran with his vaunted H-bomb in the opening seconds of the fight, snapping a two-fight losing streak that had many questioning why the living legend was still competing against the world’s best.

The throwback performance gave Henderson new life in the middleweight division, and now that his celebratory tour is over, Henderson is starting to consider his options for a return fight in October or November.

One opponent he won’t be considering though is old rival Michael Bisping.

“I don’t even think it’s worth doing, to have a rematch with him,” Henderson said Monday on The MMA Hour. “I could never top what I did the last time. So why diminish that?

“Even if I knocked him out again, it wouldn’t be nearly as gratifying for the fans as the first time.”

Henderson and Bisping’s rivalry dates all the way back to 2009, when he and the Englishman coached opposite one another on the ninth season of The Ultimate Fighter. The show took a patriotic theme — Team United States versus Team United Kingdom — and while Bisping’s team swept the finals, Henderson ended up getting the last laugh, knocking Bisping out cold with a legendary finish at UFC 100.

Bisping, now 36 years old, has long expressed interest in running that fight back. From a rankings perspective, a rematch would make sense. Both middleweights have been around forever and both rest on the outer edges of the division’s top-10. Bisping also could build some momentum for a rematch with a victory over Thales Leites on July 18, which would mark his second straight win over a ranked opponent.

Henderson, though, doesn’t plan on giving Bisping the chance to avenge that infamous loss.

“It’s fun for me to have him kind of know that he’ll never be able to make up for that, or change that,” Henderson said.

Among his many options next, Henderson said he’d most prefer to land a second shot against Gegard Mousasi or Vitor Belfort. Both men finished Henderson in less than two minutes in recent years, and with two fights left on his UFC contract, he’d love to get some payback.

Top-10 ranked middleweight Tim Kennedy also recently took to Twitter to propose a Fight for the Troops bout against Henderson, but that, too, doesn’t appeal much to the former champ.

“I think I saw that,” Henderson said. “I wasn’t overly interested in fighting Tim. I like Tim. He represents the sport well and you know, I just don’t think it would be that exciting of a fight for the fans, just with his style and mine.”