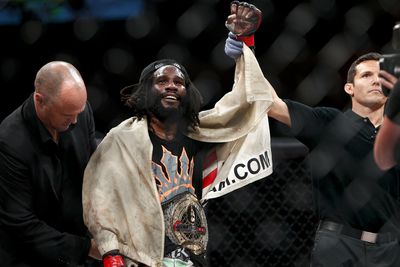 Daniel Straus laughs as he ponders how quickly the way he’s perceived in the industry has changed.

It was less than two years ago that Straus was considered just a name who was there, an opponent for then-featherweight champion Pat Curran’s showcase fight on what was originally scheduled to be Bellator’s pay-per-view debut in Nov. 2013.

Less than two years later, Bellator barely looks like the company that was on display that night in Long Beach, Calif., when Straus had what was then considered a stunning upset of Curran, which was followed by Eddie Alvarez’s lightweight title win over Michael Chandler.

Alvarez is long gone; Curran and Chandler are barely in their respective title pictures, and with a new boss in charge, Kimbo Slice vs. Ken Shamrock headlines Bellator 138 in St. Louis on Friday night.

As for Straus? Well, if the former Bellator featherweight champ was the B-side with his biggest career opportunity in Long Beach, now he’s in the other role. Straus will meet undefeated upstart Henry Corrales on Friday night’s main card.

“It’s crazy how fast I became the veteran guy someone else wants to take out, right?” the 30-year-old American Top Team fighter asks. “I mean, it says you’ve accomplished something in this sport when you’re put in a position where someone else can make their name off beating you on a big card, but it’s crazy how fast this came.”

Corrales, fighting out of the Los Angeles suburb of Whittier, has put together a 12-0 record with 10 finishes. But that’s been at the King of the Cage level, and this is a big step up in competition and exposure.

But Straus isn’t going to look past Corrales’ lack of big-fight experience.

“Look, I understand why someone would look at his record and say ‘he’s only fought in King of the Cage,'” Straus said. “But I can’t look at it that way. Someone in his position is young and hungry and wants to make an impression, and if I don’t respect that, I could get caught. But I plan on going out and showing why I have the spot he wants and that I don’t plan on giving it up so easy.”

Straus also understands there are two different ways to look at this fight booking. The talk going into Slice vs. Shamrock is that Friday night’s card could top the company ratings record set last November by Tito Ortiz vs. Stephan Bonnar. While the pessimist could take the bout against Corrales as a vet being set up against an up-and-comer, Straus sees it as a vote of confidence from Scott Coker and Co.

“I mean, look at it this way, this is going to be the biggest night of the year in Bellator,” Straus said. “So if they’re going out of their way to put me on the main card, that tells me management has faith in me to put on a good fight that the fans will enjoy. I’m see this as an opportunity I’m going to make the most out of.”

Regardless of the setting, Straus knows this is a critical career juncture. He’s dropped two of his past three fights in painstaking fashion. At Bellator 112, he surrendered that title back to Curran with just 14 seconds left in the fifth round. He also submitted in the championship rounds in another title fight against current champ Patricio Freire in January.

Against Curran, the bout appeared on it’s way to a coin flip of a decision before Staus tapped. Against Freire, Straus was clearly winning the fight before losing focus.

“It sucked, but at the end of the day, you’re just losing a fight,” said Straus, who has never dropped consecutive bouts. “You wake up the next day, you see your kids and your family, and you know its not the end of the world. I don’t get too high or too low. Yeah, this is a big fight. With a win here, I’ll be right back in the thick of things.”