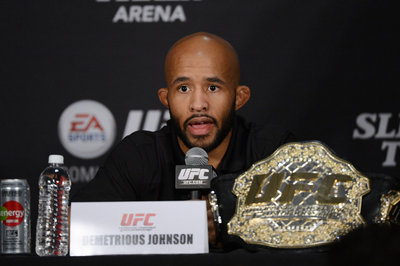 Last week was an interesting one to say the least for the Ultimate Fighting Championship (UFC) flyweight division, as it was revealed that two of the top four fighters in the weight class would be out of action for a year.

Although for entirely different reasons.

No. 1 ranked John Dodson revealed he would be sidelined until late 2015 due to a recent ACL surgery while Ali Bagautinov (No. 4) was suspended by the British Columbia Athletic Commission (BCAC) and UFC for failing his UFC 174 drug test

The man somewhat in the middle of the 125-pound mess is division kingpin Demetrious Johnson, who defeated Bagautinov at UFC 174 despite the fact that “Puncher King” was hopped up on Recombinant Human Erythropoietin (EPO).

As a result of Dodson’s upcoming layoff, Johnson now finds himself waiting to see who he’ll defend his title against, as “The Magician” was expected to challenge “Mighty Mouse” next.

Johnson stopped by The MMA Hour to discuss the recent events and how it affects him moving forward.

As far as Johnson is concerned, he doesn’t know whether or not the EPO affected Ali’s performance, but did find it strange that he had a pep in his step in later rounds when history has shown that the Russian-born fighter doesn’t have the best cardio.

“Who’s to say that it even affected his performance, you know? The thing we do know is that he was on it and we know what EPO does. Who knows, maybe he would have gassed in the third round. In the fourth round, he did have a hard time getting up. I almost had his back and then the bell rings, he was saved by the bell. If you watch all of his previous fights, by the third round, he is gassed. But he still had a pep in his step come the fifth round.”

Cyclists know all about the enhanced cardio EPO provides thanks to its red blood cell reproduction. But the test that provided the positive result was an out-of competition sample taken 12 days prior to fight night, while his post-fight test was negative.

But as Johnson puts it, “who knows what’s really going on?”

In an interesting note, Johnson revealed that he wasn’t subject to a random test like Ali was. Perhaps the fact that Bagautinov has a shady past had a lot to do with that.

Addressing his beef with Dodson and his recent injury, Johnson revealed he doesn’t necessarily hate Dodson, he just doesn’t like when fighters brand themselves next in line for a title fight before UFC confirms it, or when they act like “clowns.”

“So, I knew that he was injured before everyone. There is a lot of stuff that fighters know before the media does. I felt bad for the guy because that’s a huge injury. I hope the best and hope he has a good recovery and comes back to the UFC. Prior to the fight, he was like, ‘I’m next.’ I just don’t like it when fighters say that they’re next. We were just sitting waiting for the UFC to call us and to say, ‘Hey, you’re fighting Dodson next.’ And we would have been like, ‘Okay, sounds good! Tell us when and where and we will be there.’ So, anytime UFC calls me I always say yes… each time UFC or WEC has called me, I never back out of a fight. So when Dodson was saying ‘I’m the next fighter in the division, Demetrious has to fight me.’ No I don’t. Why am I going to grant you your wish? What do you offer me? Nothing. I’m doing you a favor fighting you again. That’s why I came straight out and say that he wasn’t next. If UFC calls me and says Dodson is next, okay, now you’re next. So that’s where it call came from. I don’t dislike the guy. I was just being straightforward You’re not next. When UFC calls me and says you’re next, then you are, until then, no one is next until UFC calls me.”

As for what’s next for Johnson, he isn’t sure just yet, but admits that the upcoming flyweight fight between Brad Pickett and Ian McCall, which goes down this weekend (July 19, 2014) at UFC Fight Night 46, could produce his next “possible” opponent.