Donald Cerrone fights so much to pay off his taxes, claims UFC title ‘means nothing’ 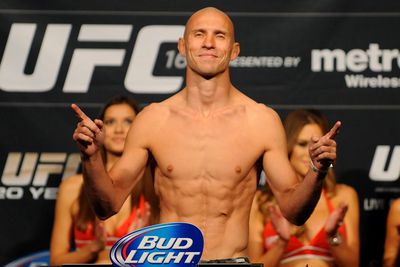 Being No. 1, however, is an entirely different thing.

There are some like former Ultimate Fighting Championship (UFC) Heavyweight champion, Tim Sylvia, who couldn’t go anywhere without his belt.

After all, reaching the pinnacle of mixed martial arts (MMA) is hard work. The championship strap symbolizes all the hard work and dedication.

While that’s fine for some, others like Donald Cerrone aren’t too interested in the hardware. In fact, “Cowboy” recently told FOX Sports that becoming UFC Lightweight champion would be great, but the belt itself won’t mean as much to him as being recognized as the best in the world will.

“Yeah, as soon as I win it, because it don’t mean nothing to me, I’m going to launch it inside the RV and go about my business. So, that’s what’s going to happen with that. That belt don’t really mean much to me. Being first would be cool but the belt. I don’t care, man. And then I’m going to turn around and say, ‘let’s go…let’s fight as many times as we can.”

Cerrone will get his chance to win the title when he faces division champion Rafael dos Anjos later this year.

It’s a fight that can’t come soon enough for “Cowboy,” who admitted that the reason he fights so often is to pay off his taxes.

“I’ve been taking those fights just to pay my taxes off, that’s what people don’t understand. They give us this big chunk of money and then idiots like me spend it all. Then they tell me, ‘wait, you have to pay us our set.’ Then, I have to go fight again so I can pay them. (laughs)”

The struggle is real. Uncle Sam is, too.