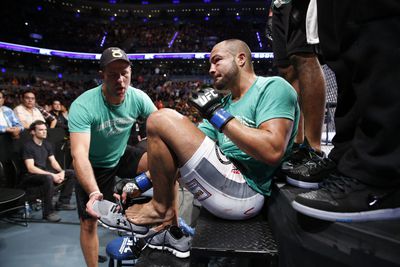 It didn’t just look like Eddie Alvarez wasn’t able to see out of his right eye while watching at home. He actually couldn’t.

Gilbert Melendez caught Alvarez with a perfect standing elbow in the first round and it broke Alvarez’s nose and orbital bone at UFC 188 on Saturday night. In between rounds, Alvarez, not realizing how severe it was, blew his nose, which caused the eye to swell shut. The rest of the fight was an uphill battle for the Philadelphia native.

“I didn’t know where he was,” Alvarez told Ariel Helwani on Monday’s edition of The MMA Hour. “I didn’t know if he was three foot from me, five foot from me or a foot away from me. I think I threw a check hook at some point and the guy was nowhere near me and I kind of laughed to myself during the fight. My range was way off, because I couldn’t see out of my back eye.”

Somehow, though, Alvarez was able to win a split decision over Melendez. Alvarez, with little choice, went to his wrestling and wore Melendez out. The 7,000-plus foot altitude in Mexico City surely played a role, too. Alvarez didn’t even realize the elevation. He was like cornered dog, just trying to survive.

“I think at that point I became more dangerous than I would have been it if I didn’t have it,” Alvarez said. “Because if he was to step in the pocket, I was gonna throw stuff that was basically like a guy who was willing to die. Because that’s how I felt. I was a little bit nervous for my own safety. That kind of put Gil in more of a dangerous situation because of how nervous I was.”

Alvarez (26-4) credited coach Henri Hooft for calming him down in between rounds. The Blackzilians product was freaking out because of his eye, yet still managed to stay poised in the Octagon.

“In my own head, I was panicking and getting a little nervous, because I just couldn’t see,” Alvarez said. “He kept me not thinking too much and pushed me back out there and told me to keep going, that I’m ready for whatever. I owe it to him that I was able to stick in there and stay with it.”

Overalll, though, Alvarez was not pleased about what happened Saturday night. He wanted nothing more than to dominate Melendez, the former Strikeforce lightweight champion. It didn’t happen that way, though he gutted out a close victory.

The key for Alvarez? Shutting off his own inner monologue.

“I think when your mind is trying to tell you anything, you just tell it to shut the f*ck up,” Alvarez said. “Your mind starts messing with you and telling you to quit. It’s telling you you’re not ready for this or this isn’t right. Once something gets uncomfortable, it’s easy to say, ‘OK, I’m done.’

Alvarez, 31, picked up his first UFC win and has now won three out of four overall. He should be in line for big fights coming up. There’s a good chance he’ll have both eyes for all of those.

“Right away, my heart started racing,” Alvarez said when it first happened. “I couldn’t see anything. I’m not super happy with what went on. I want to put that out there. I’m not happy with my performance. My training that I did, it didn’t add up to what I did out there.”