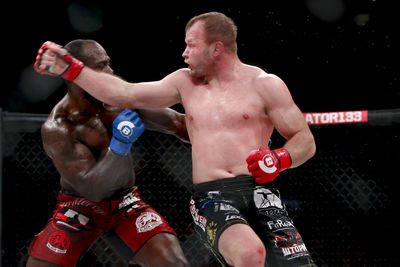 LOS ANGELES — The new frontier of anti-doping in mixed martial arts is upon us.

Former Bellator MMA middleweight champion Alexander Shlemenko was suspended three years and fined a total of $10,000 by the California State Athletic Commission (CSAC) on Tuesday afternoon at an appeal hearing here in Downtown Los Angeles. Shlemenko tested positive for anabolic steroids before his second-round knockout win over Melvin Manhoef at Bellator 133 on Feb. 13 in Fresno, Calif.

Testing on Shlemenko’s urine sample, which was screened at UCLA, showed that he had a 50:1 testostone/epitestosterone ratio. Anything more than 4:1 is illegal for a MMA fighter or boxer in California. The steroid oxandrolone and oxandrolone metabolites also showed up in Shlemenko’s system. A second test on the sample confirmed the initial results.

Previous suspensions for first-time offenders like Shlemenko were typically either nine months or a year, albeit with much less egregious T/E ratios. The Nevada Athletic Commission will also be suspending first-time performance-enhancing drug offenders for three years and the UFC’s new drug policy has similar stringent penalties.

News broke of Shlemenko’s positive test in March. The Russian fighter appealed Tuesday and the suspension and fines were upheld. Shlemenko’s win over Manhoef will also be overturned into a no contest.

On Tuesday, Shlemenko’s lawyer Howard Jacobs argued that the discipline should be wiped away because CSAC never collected a B sample from his client and the three-year suspension was only put on the table five days before the hearing. Shlemenko’s team believed the latter to be retribution for appealing the original penalties, which Jacobs said was only for one year with a $2,500 fine. Shlemenko, who spoke during the hearing, denied any PED use.

The commission upheld the discipline brought to the table by executive officer Andy Foster, because taking a B sample is not a CSAC requirement. Anthony Butch, the director of the UCLA Olympic Analytical Laboratory, testified that he has never seen a B sample that did not confirm an A sample in a steroids test.

Alexei Zhernakov, Shlemenko’s manager, told MMAFighting.com that they are not happy with how things went Tuesday and are not done fighting this case. They plan to take it to the next level.

“We are extremely disappointed with the way this hearing went,” Zhernakov said. “We were not given even a slight chance to give our side of the story. All the materials that we prepared, they didn’t bother listening to them or reading to them.

Shlemenko (51-9, 1 NC) won the Bellator middleweight title in February 2013 and held it until a loss to Brandon Halsey last September. He boasts an impressive record of 11-3 (1 NC) with the organization and has only lost to Halsey, Hector Lombard and Tito Ortiz. The latter was in a light heavyweight bout.