Fortunes changed for five at UFC 188 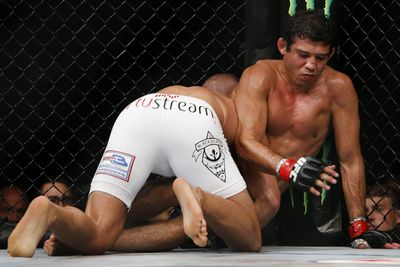 While the fans in Mexico City are some of the most rabid of any arena UFC travels to, for a UFC fighter, Arena Ciudad de Mexico looks to be the most difficult place on Earth.
The 7,800-foot elevation was hardly just a talking point on the broadcast. It was the key point of Saturday’s show, and played a major part in most of the key fights.
It turned “Cardio Cain,” once-lauded by Herschel Walker as the best conditioned heavyweight he had ever seen in any sport, into a man whose game plan to push the pace completely backfired on him as he was completely spent by the second round.
It turned Gilbert Melendez, whose five-round nonstop wars with the likes of Josh Thomson, Clay Guida and Benson Henderson were the hallmark of his career, into a man with his mouth wide open and breathing heavily in the third round, where he had nothing left for his traditional big finishing burst.
It caused Nate Marquardt to sit on his stool after the second round and tell his corner, “I’ve got nothing left,” as they mercifully stopped the fight for him.
Even 115-pound Tecia Torres, the “Tiny Tornado,” known for her constant motion, became a drizzling rainstorm. She reverted to just keeping opponent Angela Hill on the ground. Torres after the fight noted that she wasn’t herself because of having trouble dealing with the altitude, and hoped she could bring back the tornado for her next fight.
All in all, Dana White estimated a half dozen or so fighters threw up backstage after their fight. One, Yair Rodriguez, actually did so while doing his post-match interview. Rodriguez, a native of Mexico,  22, showed signs of potential superstardom. He may be just what UFC needs in its quest for a new signature stars to build around in that country. He tore the house down with his win over Charles Rosa, even evoking comparisons to Jon Jones and Anthony Pettis at the same age.
Clearly, with the kind of response the Mexican locals have given UFC, setting a new building record gate and drawing a sellout 21,036 fans, Arena Ciudad is going to be a regular stop. Dana White couldn’t say enough positive about the crowd. Even when asked about how quick and vociferous their booing was, he defended them by saying they never booed unless it was warranted.
But it can’t be denied that it’s the one location that, in a sport where a ridiculous level of conditioning is a necessity, that may soon to known by fighters as hell on Earth.

The star of the night was new heavyweight champion Fabricio Werdum. Werdum gave the training blueprint of how to fight in Mexico City. He spent 40 days at an even higher altitude, and in doing so, didn’t seem affected at all but what was killing so many others. In doing so, was able to beat Velasquez at the game he made famous, and in doing so became heavyweight champion for the first time less than two months before his 38th birthday. But while the blueprint doesn’t sound difficult, only the highest-paid UFC fighters can afford bringing a specialized camp to Mexico for that length of time.