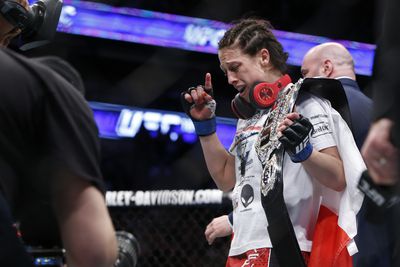 Joanna Jedrzejczyk would make for a terrible Secret Santa.

For the second straight weigh-in, the UFC women’s strawweight champion brought a gift for her opponent. Jessica Penne, though, wasn’t nearly as accepting as Carla Esparza.

Penne brought a gift of her own, though. She wanted Jedrzejczyk to have a ring. Earlier in the week, she said the champion looked like Smeagol from the Lord of the Rings movies. When Penne tried to slip the ring into Jedrzejczyk’s bikini top, Jedrzejczyk slapped her hand away.

At UFC 185 weigh-ins in March, Jedrzejczyk brought Esparza a cookie, which Esparza later said was expired. Esparza’s nickname is “Cookie Monster.” Jedrzejczyk ended up beating Esparza by second-round TKO the next night to win the women’s strawweight belt.

Oh, that Joanna. She gives and she takes.