Gilbert Melendez: ‘I might as well fight Al Iaquinta now, before he gets even better’ 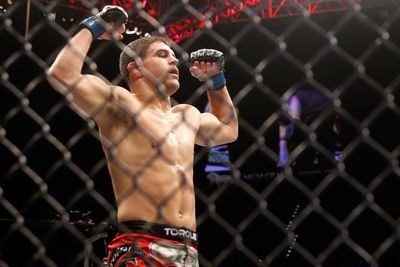 After coming up short against Eddie Alvarez at UFC 188 (video replay here), Gilbert Melendez looks to end the first two-fight skid of his career when he takes a short-notice bout against Al Iaquinta at UFC Fight Night 71 on July 15, 2015 in San Diego, California.

It’s a fight that came to be after Bobby Green — Iaquinta’s original opponent — was forced out of the contest due to injury.

The quick turnaround was a welcome one for Melendez, who revealed during his recent appearance on The MMA Hour that his plan was to compete as soon as possible. But “El Nino” knows that getting back into the win column isn’t a given against No. 13 ranked Iaquinta.

“I worked really hard to get in shape. I felt extremely healthy after my fight. I didn’t take much damage, though I did get cut on my head with that spinning elbow at the end. But it’s the first time in a long time that after a fight I feel perfectly fine. It’s such a hassle to get out of shape and then get back into shape for a 10-week camp and get back in there. You know, it’s a chance for me to make some money and I feel like I’m great shape. So, why not? I’m not getting any younger. I’m in shape, I’m good, lets keep the ball rolling.”

Of course, the fact that his fight was only a 15-minute affair was a big factor for “El Nino,” as he says a five-round bout would’ve been completely out of the question.

“No, I would’ve taken it against anybody, as long as it wasn’t a five-rounder. I’m interested for 15 minutes, let’s do it. I think Al is a tough guy. He’s one of those guys that I feel like I might as well get now before he gets even better. He is one of the up and comers that I have been keeping an eye on. I really respect his style, he fights with a lot of heart and he’s a striker, shooter. It kind of made sense. I don’t think he’s a walk in the park, that’s for sure. I mean, no one is nowadays. Everybody in the 155-pound division from one to 20 is a tough dude and can have a good night on any night. I think it’s definitely a challenge. Again, I’m not getting any younger and I just want to get out there and get some fights.”

Iaquinta is currently riding a red-hot four-fight win streak, with victories over the likes of Jorge Masvidal and Joe Lauzon.

A win over a longtime veteran like Melendez, however, would be the highlight of his career thus far and could catapult him into the top 10 and perhaps even get him into the title fight conversation.

For Gilbert, a win keeps him “in the mix” and will help avoid a dreaded three-fight losing streak. Suffering a loss could be catastrophic for his chances of getting another shot at UFC gold.