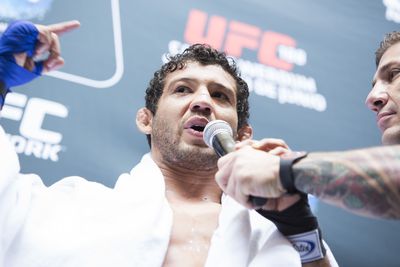 Gilbert Melendez said the altitude played a big part in why he lost to Eddie Alvarez two weeks ago. Had the UFC lightweight contender traveled to Mexico City earlier, much like Fabricio Werdum did, things could have been different.

But Melendez told Ariel Helwani on Monday’s edition of The MMA Hour that leaving home for Mexico weeks earlier just was not practical from a financial perspective.

“I wish I could have been there a month earlier,” Melendez said. “I wish I had a budget and pay that I could fly out all my training partners. Realistically, you can’t just get out there five, six weeks early. Maybe Fabricio [Werdum] did it. It would have been tough to fly all my partners, my coaches who actually have the business at the gym. It just didn’t make sense.”

Werdum was in Toluca, at a higher elevation than Mexico City, for more than a month before UFC 188 on June 13. It resulted in him winning the UFC heavyweight title against Cain Velasquez by third-round submission. Velasquez, who was only there two weeks early, admitted the altitude got to him.

Cathal Pendred, who beat Augusto Montano by unanimous decision on the card, backed Melendez’s point up last week, though. The Irish fighter tweeted that he barely broke even on the fight, because he came to Mexico City six weeks early.

@ekc I spent close to all the money I made on the fight (including win bonus) for 6 weeks training in Mexico.

Melendez (22-5), who did spend nine days at elevation in Tahoe before going to Mexico City, clearly won the first round against Alvarez, landing a wicked standing elbow that shattered Alvarez’s orbital bone and his nose. In the second round, Alvarez’s eye was completely closed. But Melendez was definitely winded and didn’t have the same gas as he did in the first. Alvarez used wrestling to win the second and third rounds.

“I slept well that night,” Melendez said. “I feel pretty good about it all. I felt like I landed good damage. I’m a little disappointed. I feel like altitude defeated me. I couldn’t really let go.

“[Anthony] Pettis kind of beat me legitimately [at UFC 181 in December. That was hard to deal with. Something like this, I still felt like I was a winner.”

“I totally understand how I could have lost the fight,” Melendez said. “I think I lost the third round. I thought I won the first round better than any other round. I watched the bootleg and I thought I won the second round. I got taken down at the end, but I popped right back up. He didn’t do nothing with it. I get sick of people telling me, ‘Oh, the takedown, Gil.’ OK, well, but what do you mean by that? What is the takedown and what did he do effectively with it?

Melendez, 33, will have a quick turnaround and meet Al Iaquinta in the co-main event of UFC Fight Night: Mir vs. Duffee on July 15 in San Diego. As for whether or not he’d consider fighting in Mexico City again, Melendez said he would. He’s of Mexican descent and that’s an important place for him to fight despite the obvious drawbacks.

“I’d have to find a serious sponsor to house me out there and to really make it happen,” Melendez said. “I did the research on it a little bit more. I would definitely want to give it another try. I just want to do it the right way out there. It’s definitely tough. I think it’s something that I should have considered a little more, looked into a lot more and really thought about.”

Other fighters, maybe even Velasquez, are probably echoing the same thing. Nate Marquardt’s coach Trevor Wittman told MMAFighting.com last week that he thought Marquardt would be fine, because they train at elevation in Denver. Marquardt wasn’t, not looking like himself in second-round TKO loss to Kelvin Gastelum.

It might be difficult for the UFC to convince some fighters to compete in Mexico City moving forward. Melendez would do it again, but he might need a little bit of a sweetening of the pot — and maybe someone to help pay for a training camp down there.

“It doesn’t mean I’m scared to go back there,” he said. “If the price was right, the stars were aligned, I would definitely go back.”