Interview: Bellator 139’s Bubba Jenkins out for redemption against Joe Wilk in Mulvane 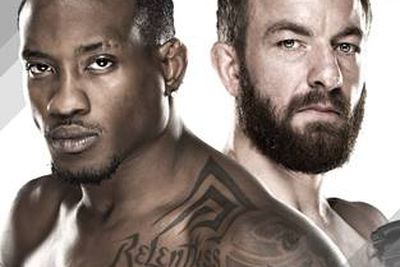 Featherweight Bubba Jenkins had everything going his way, including a four-fight win streak coming into Bellator 132 earlier this year. In fact, the NCAA Division I wrestling champion from Arizona State University (ASU) seemed like he was potentially one win away from a 145-pound title shot.

Jenkins freely admitted to being “borderline cocky” going into a fight with former World Series of Fighting (WSOF) champion Georgi Karakhanyan. And in one fell swoop, Karakhanyan broke the win streak and left Jenkins frozen on the mat.

It was the kind of loss that humbles even the most cocky of fighters, but the only way to avenge a setback like that is to get right back in the cage and show you’re a better man than the last time you fought.

Jenkins will get that chance this Friday night (June 26, 2015) against Joe Wilk at Bellator 139, which takes place inside Kansas Star Arena in Mulvane, Kansas.

Jenkins recently chatted with MMAmania.com about his quest for redemption and working his way back to a title shot starting with “The Nose.”

Submissions are indeed a specialty for Wilk, accounting for 15 out of 18 wins as a professional. However, Wilk has openings in his ground game, too, having been submitted four times. After dropping his last fight at Bellator 130, Wilk joins Jenkins in seeking redemption, which means he might compete like he has “nothing to lose.”

“I’ll become a deadly athlete, a deadly MMA fighter. People will be afraid of me in every aspect of the game, especially when I start shutting the jiu-jitsu game part of it down, which you know I’m doing a very good job of it now. We’re really working on mixing (it) comfortable everywhere I go, and I would say I’m 85 percent of where I want to be.”

If Jenkins seemed “cocky” before his last fight, it’s clear that getting caught by Karakhanyan has caused him to do an honest self-assessment. And he’s working very hard to achieve that last 15 percent before this weekend arrives.

“Antonio McKee, my coach at Body Shop, when he starts to see me get tired, he throws a really good jiu-jitsu guy on me. I give ‘em my back and we work from there, I get a double leg and we work from there, so we’re really working on all aspects of where I could end up with a neck hunter like Joe. We’re not underestimating a guy like him.”

Jenkins is also acutely aware that time doesn’t stand still, as Bellator MMA continues to load up its Featherweight division with talent such as former UFC fighter and RFA featherweight champion Justin Lawrence. Jenkins doesn’t intend to let anyone pass him in the race to the top.

It’s time for Jenkins to rebuild off his last loss and get that experience against a game veteran like Wilk. Until then, check out the complete audio of our interview below, as well as stay tuned to MMAmania.com for complete coverage of Bellator 139 this Friday night.