Jessica Aguilar on UFC 190 debut against Claudia Gadelha: ‘I do think this is a contender fight’ 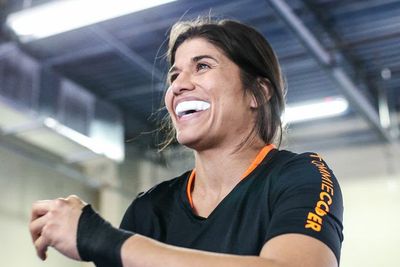 The UFC’s newly signed strawweight Jessica Aguilar will have a tough test in her debut at UFC 190 against Claudia Gadelha in Brazil. Not only will she be the interloper in the situation with the partisan crowd in Rio pulling for Gadelha, but she’ll be going up against the woman whom many thought beat the current champion.

With Jedrzejeczyk set to defend the title next week at UFC Fight Night 69 in Berlin against Jessica Penne, Aguilar expects her fight with Gadelha to be for the No. 1 contender spot to face the winner. The erstwhile World Series of Fighting strawweight champ appeared on Monday’s edition of The MMA Hour and talked about it.

“I am sure she’s pumped about it, Claudia, and we saw her last fight,” Aguilar said. “I mean, in my eyes I think she won the fight. But, I do think that this is a contender fight and I am so pumped and excited about it.”
Asked directly if she’s been informed by the UFC that it is definitively a title eliminator, Aguilar said no.

“They have not [told me that], but things can happen,” she told Ariel Helwani. “They said it can happen if I go out there and do what I need to do and show my skills and then it might happen. But depending on what happens with Joanna and Jessica in a week, anything can happen and we’ll just go from there.

The 33-year old Aguilar, who trains at American Top Team in Coconut Creek, Florida, was a prized free agent pick-up who signed with the UFC last Thursday. She is riding a 10-fight winning streak that spans back to her time with the now defunct Florida-based promotion, G-Force, through Bellator and eventually the WSOF.

Aguilar won the inaugural strawweight title with WSOF against Alida Gray in January 2014, and defended the belt twice since then against Emi Fujino and Kalindra Faria. She has victories over Megumi Fujii, TUF 20 alum Lisa Ellis and Esparza during that run as well.

Aguilar said that her and Gadelha had a bit of history together going back to a grappling tournament.

“I already competed against her in Brazilian jiu-jitsu when I was a blue belt, it was a couple of years back in Texas,” she said. “It was an open class. She was like 145 pounds at the time, she was a brown belt, and I lost by advantage. But I’ve been watching her for a while now, and I know that she’s very talented. Based upon her fight with Joanna, I know that she has a lot of skills. It’s going to be an exciting match-up, and I’m just pumped to fight in front of those great fans.”

Though it’s all speculative as she gets her UFC career rolling, Aguilar, who is Mexican by birth, said that she wouldn’t hesitate to fight in Mexico if given the opportunity — regardless of what happened this past weekend at UFC 188. In Mexico City, several fighters — including those known for their cardio, like Gilbert Melendez and Cain Velasquez — gassed out competing at over 7,000 feet above sea level.

Asked if that might make her think twice about taking a fight there, she said it wouldn’t.

“Not at all, it made me even want it more,” she said. “If I get that opportunity to fight there, I’ll do my fight camp there. My entire fight camp. So, we’ll talk about that then, but right now I am really excited about UFC 190, and I can’t wait to show the fans on this platform who Jessica ‘Jag’ is.”

One of the winners from Saturday night’s fights at the Arena Ciudad de Mexico was Aguilar’s training partner, Tecia Torres, who scored a decision over fellow TUF 20 alum Angela Hill. In the aftermath of the fight, Torres was on record saying she’d fight her teammate Aguilar only if a belt was involved.

When asked if she echoed this sentiment, that she’d face Torres under those specific circumstances, Aguilar said she would see.

“If that happens, we’ll talk about it then,” she said. “But if it happens, and she’s in that position, then yeah. We train at one of the top gyms in the world at American Top Team and we have a lot of guys like that as well in the welterweight division especially. So, if that happens, I’m honored to go against a teammate.”