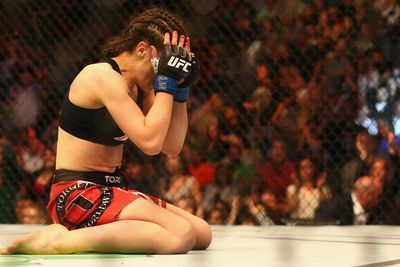 Joanna “Champion” might have dominated Jessica Penne at UFC Berlin, but injured herself in the process.

In her most recent performance, a title defense against American challenger Jessica Penne at UFC Berlin last Saturday, Joanna Jedrzejczyk once again looked like she simply can’t be beaten. And she obviously can’t lie either.

During the post-fight press conference, a reporter asked the Polish Muay Thai standout about her condition and if she had a dislocated her thumb. Her response sounded a bit fishy.

“Uhm, I… no, nothing happened”, Jedrzejczyk stammered. “We will see. Yeah, I feel very good.”

But that was not the case. The truth is, Jedrzejczyk suffered a “badly” broken right thumb during the fight, as Ariel Helwani reported on Monday’s edition of The MMA Hour, said, Jedrzejczyk’s co-manager Shu Hirata revealed the injury to him. He gave no information on when the injury happened, Jedrzejczyk used her right hand over the full course of the fight. The strawweight champion will likely need surgery now and be out for a while.

Jedrzejczyk stated at the post-presser, that she wanted to take some time off anyway, and plans to return in November or December. The 27-year old fought three times over the last seven months: a close split-decision win over Claudia Gadelha in December, a one-sided affair in the title fight against Carla Esparza in March and last weekend’s dominant title defense against Penne.

Here is a picture of her cast, Jedrzejczyk posted on her Twitter yesterday: