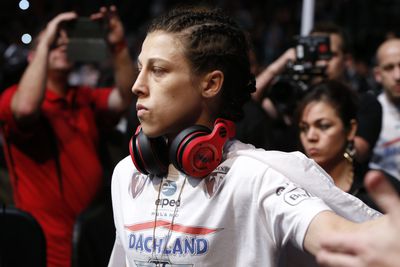 Joanna Jedrzejczyk seemed to escape any kind of damage on Saturday in a complete performance against Jessica Penne. But looks can be deceiving.

It’s unclear when in the fight she sustained the break, but she continued to throw right hands throughout in a third-round TKO victory over Penne in the main event of UFC Fight Night 69 in Berlin.

The Poland native dropped Penne in the first round, bloodied her up in the second and then finished her in the third. Referee Marc Goddard had no choice but to step in with Penne defending, but clearly no longer in the fight. Jedrzejczyk (10-0) avoided all of Penne’s clinch takedown attempts and made the challenger pay for them with elbows. It was a star-making performance for the 27-year-old, who beat Carla Esparza for the title at UFC 185 in March.

Afterward, Jedrzejczyk said she wanted to take a break from the Octagon after going 3-0 over the last seven months. Now, with the broken thumb, it seems like that time off will not be voluntary. It’s unclear how long Jedrzejczyk will be out, though she said Saturday she’d like to return around November or December.

The most likely challenger for the vicious striker’s title will be the winner of a UFC 190 bout between Claudia Gadelha and Jessica Aguilar on Aug. 1 in Rio de Janeiro. Jedrzejczyk owns a win over Gadelha, but the December split decision was incredibly close and many felt Gadelha should have won. Meanwhile, Aguilar, a recent signee from World Series of Fighting, has long been considered one of the best women’s strawweights in the world.