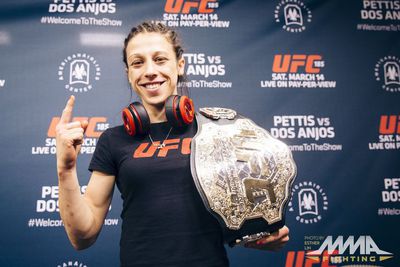 Judging by this picture, you would’ve guessed the Joanna Jedrzejczyk was trying to inflict as much punishment on Jessica Penne during their strawweight title fight at yesterday’s (June 20, 2015) UFC Fight Night 69 event in Berlin, Germany.

Not so, says Joanna, who revealed that her slowed down, accurate attack in the later rounds was all part of her corner’s strategy. Something that had to be done due to the toughness Penne showed.

She explained during the post-fight press conference (via MMA junkie):

“No, I was listening to my corner and my trainers. They said that I should take it easy, just throw a few punches one by one with some extra angles. I did what they said and it was a key to the success.”

Known for her striking, Joanna says the fact that her fight went into the third round allowed her to utilize more tools of her mixed martial arts (MMA) arsenal. Moving forward, she hopes to be able to show the world even more “aces” she has in her pocket.

“I said before the fight that I had a few aces in my pocket. So I dropped a few kicks and she was surprised, I think. But I’m doing lots of wrestling and jiu-jitsu. I think I have other aces in my pocket, so wait for the next fight.”

With the win, Jędrzejczyk improves to (10-0, 4-0 UFC) and is setting herself up to be a potential superstar for the promotion. One thing is certain, another performance like her previous two, and there won’t be much room to argue that the 115-pound striker  is one of the best MMA has to offer in any division.

Question is, who should be next to attempt to slow down the runaway Polish train?

For complete UFC Fight Night 69 results, including play-by-play updates of all the “Jedrzejczyk vs. Penne” main card and “Prelims” action on UFC Fight Pass, be sure to head over to our UFC Berlin live blog right here.