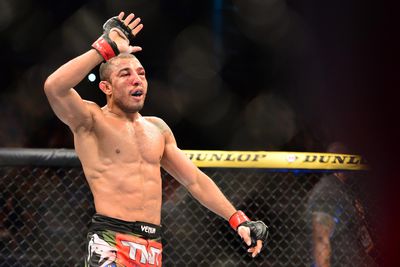 Jose Aldo has an injury and his next UFC title defense is in jeopardy.

The first and only UFC featherweight champion, who is scheduled to take on Conor McGregor in the main event of UFC 189 in Las Vegas on July 11, has sustained an injury in training. Aldo fractured his rib and potentially require three to four weeks of treatment to get completely healed, but hasn’t decided to pull out of the fight yet.

Sources close to the situation confirmed the news to MMA Fighting following a report by Combate. MMA Fighting reached out to Aldo’s manager and Nova Uniao head coach Andre Pederneiras for comments, but he did not respond.

Aldo (25-1) last defended the 145-pound title against Chad Mendes in October. He was initially slated to defend it in August, but pulled out from UFC 176 with a shoulder and spine injury. McGregor (17-2) earned a shot at the title after UFC wins over Marcus Brimage, Max Holloway, Diego Brandao, Dustin Poirier and Dennis Siver.