Jose Aldo welcomes pre-fight brawl with Conor McGregor: ‘It would be wonderful’ 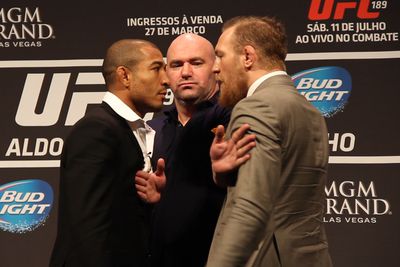 The UFC featherweight champion will face the Irish contender on July 11, but he’s not sure he will be able to wait for UFC 189. In fact, he wants to repeat the Jon Jones-Daniel Cormier pre-fight brawl days before the actual fight.

Aldo and McGregor faced off multiple times during the UFC 189 world tour earlier this year, and the possibility of being fined prevented him from touching his opponent. Now, the UFC champion believes he’s cleared to do whatever he wants.

“We talked about a possible fine during the tour, but it is too expensive, and I couldn’t afford getting fined,” Aldo said in a press conference in his gym on Tuesday. “That was an issue because I couldn’t do what I wanted to do. But the fight is around the corner now so we can do something more because nobody will do anything about it. It there’s any trash talk, I know what I’m going to do.

“I already have in my mind what I’m going to do, but it’s a secret,” the champion continued. “It’s going to be a different Aldo. There’s no fine or suspension anymore. After everything they spent, they won’t cancel this fight for anything. I’m sure he will come after me, but I guarantee it’s going to be different this time.”

Asked about McGregor’s pre-fight trash talk, Aldo said he would love to brawl with “The Notorious” on fight week.

“It would be great if there’s a brawl. I hope that happens. That’s what people want,” he said. “I’m paid to beat people up so, if that happens, it would be wonderful. I hope I can beat him up. The fun is over, it’s going to be for good now. After this staredown, he will give up doing anything he was planning to do. You will see.”

According to the first and only UFC 145-pound kingpin, McGregor will be afraid after their next staredown.

“I’m usually calm, he’s the one trying to promote himself. We’ll see when we’re face to face, and I will let my hands do the talking for me,” he said. “He can say whatever he wants, but he will feel my answer when the time comes. I’m sure he will be afraid, I felt that when I looked into his eyes. I’m going after him. He’s never fought a guy like me before.”