Junior dos Santos says he is not injured, sees himself as the champion by year-end 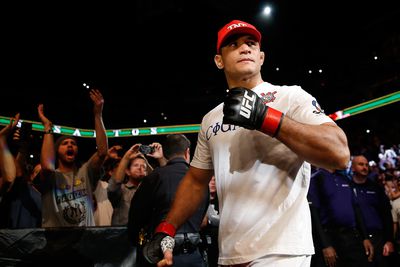 In a public note sent out by his team, Junior Dos Santos explains that he could fight Fabricio Werdum by the end of the year and believes he will be the champion once again.

Junior dos Santos says he is healthy, ready to go, and does not want to wait around for his title fight. Since Dana White said Andrei Arlovski or Stipe Miocic would be the next challengers for Fabricio Werdum’s belt because dos Santos was still nursing an injury, the Brazilian’s team sent out a public note explaining Cigano is not injured anymore and is able to train regularly.

As was reported by Combate, this is what the note read:

“As opposed to what was published on 06/18, Junior dos Santos is no longer injured. He has been through two surgeries on January 2015, one on his right ACL and another on his nasal septum. Because of the procedures, he had to recuperate for six months, doing physiotherapy and light training. Junior dos Santos will be training boxing next month and will be cleared to train other martial arts as well, which will make him available to fight at the end of the year. The same time Fabricio Werdum will be available, since he received a medical suspension of 180 days after his last fight. Number two on the rankings, Junior dos Santos is the most expected fighter for a title shot.”

To add to the note, dos Santos said everything was going his way and he had high hopes of being the champion still inside of 2015.

“Everything is going all right, I can see myself as the champion again still this year.”