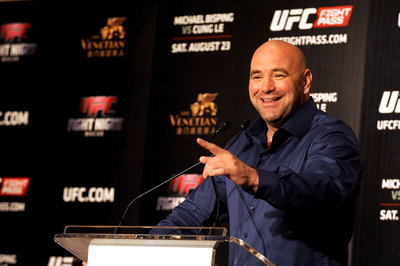 Friday night the UFC on FS1 goes head-to-head with Bellator on Spike TV. Could MMA be entering an era of Friday Night Wars?

For the first time ever the UFC and Bellator are going to be running events at the same time and in the same state. UFC Fight Night: Jacare vs. Mousasi was announced after Bellator 123 had already been scheduled. The UFC claims its just a coincidence, but given their past track record of aggressively counter-programming competitors (Affliction vs UFC:Silva vs Irvin etc etc), only the most naive would believe that.

But unlike past counter-programming, this time it’s going to be an apples-to-apples comparison. It’s not a UFC cable show vs a pay-per-view, it’s UFC on free cable vs Bellator on free cable. And the wrinkle is this, since Spike TV is the much bigger cable channel Bellator actually has a real chance to beat the UFC in the ratings.

Former Bellator matchmaker Sam Caplan said that Bellator considered moving their event to a different night when the UFC first announced, but ultimately decided not to be bullied. Caplan also thinks that head-to-head MMA could potentially recreate some of the excitement that pro-wrestling fans enjoyed during the WWF vs WCW in the 1990s “Monday Night Wars.”

Dave Meltzer in the Wrestling Observer speculated that the UFC might not only lose out at the gate but could even get the worst of it in the ratings:

What’s notable is that not only should Bellator draw better, since they are in a 7,000-seat arena while UFC is in a 2,900-seat arena (which was virtually sold out two weeks ago), but they could do bigger TV numbers as well. Bellator has a show built around its biggest stars, and Spike is a far more powerful station than FS 1. In fact, the only edge UFC has is that it’s UFC.

With the intro out of the way, let’s let the BE staff debate.