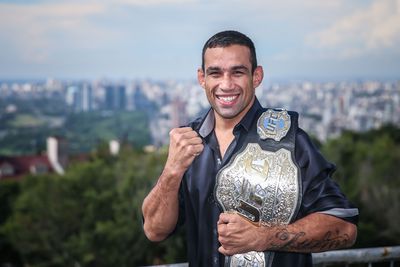 Fabricio Silveira Werdum was a regular 21-year-old guy from Porto Alegre, Brazil, when a trip to the beach changed his life forever.

Fabricio Werdum went to the beach with Larissa, his girlfriend at the time, and her family and friends. But when they got there, Marcos, Larissa’s ex-boyfriend, was waiting for them. Werdum knew that “Marquinhos”, as they used to call him, still had a crush on Larissa, but wasn’t bothered about it. Marcos had other plans.

Marcos was a jiu-jitsu practitioner, and Werdum had no idea what jiu-jitsu was.

“I guess he wanted to embarrass me in front of her and her entire family,” Werdum recalls, “so he challenged me to fight him in a jiu-jitsu match right there at the beach.”

At first, Werdum said no. “I like women, not jiu-jitsu,” he told Marcos. Larissa, for unknown reasons, asked Werdum to take the challenge against the experienced opponent. She probably knew Werdum would lose to her ex-boyfriend, but still wanted to see it happen.

“She told me to do it, that it would be fun, but I declined. I told her I had no idea what jiu-jitsu was, but she eventually convinced me to do it.”

The match ended quickly, and Marcos only needed less than a minute to finish Werdum with a triangle choke. On the next day, still pissed off by the loss, Werdum visited Marcio Corletta’s gym Winner-Behring and started training jiu-jitsu.

Werdum became a blue belt world champion a year later, but never had the chance to avenge that loss.

The loss at the beach didn’t change his relationship with Larissa, though. At least in Werdum’s mind.

“She knew I never did jiu-jitsu before, so it wasn’t an issue. At least I think so,” he said. “You never know. I’m not sure. Who knows, maybe she cheated on me after that [laughs].

“He recently contacted me, inviting me to teach a seminar in his gym. Yeah, right…”

A year after winning the jiu-jitsu gold, Werdum moved to Spain to live with his mother, Celia Silveira, and quickly looked for a place to train. He couldn’t find one, though. Jiu-jitsu wasn’t popular in Europe at that time, and there was only one traditional jiu-jitsu school in Madrid. It wasn’t similar to the jiu-jitsu taught in Brazil, and the head coach didn’t respect Werdum’s previous accomplishments.

Werdum needed to find a new place to train in Madrid, but it wasn’t easy. The Brazilian grappler then decided to visit Vicente Calderon stadium, where the Spanish judo team trained at the time, and finally found a place to stay in shape and learn new techniques.

“I was tall and thin, they called me ‘ghost’,” Werdum said. “They threw me around, but I always got the best on the ground. They respected me because I always came back the next day, so the coach eventually invited me to teach the judokas how to fight on the ground.”

Werdum had 200 students in his jiu-jitsu classes at one point, but still needed money to buy flight tickets to return to Brazil and compete in jiu-jitsu, so he decided to visit a temporary employment agency and get a regular job.

“I needed the money to compete in Brazil,” he said. “I worked as bricklayer, operating forklifts, building scenes for TV shows. I did everything. When I worked at the TV, I told them I would come back one day to give interviews, and they laughed at me.

“I have no idea how many interviews I gave them.”

Werdum, who tried to get a job at a petrochemical complex in Sapucaia do Sul but failing the test, celebrates sucking at other jobs and getting beat up buy his ex-girlfriend’s ex-boyfriend.

“If I never had accepted my girlfriend’s ex-boyfriend’s challenge, I would never start training jiu-jitsu,” he said. “And thank God I failed that test, or I wouldn’t be where I am today.

“And you see how things are. Ten years later, I submitted the best in the world, and now I’m fighting for the UFC heavyweight title.”

Werdum went on to win two more world championships as a black belt and two gold medals at ADCC, but almost retired before becoming the interim UFC heavyweight champion in 2014.

“I thought about stopped fighting a few times, after some losses and contract disputes when I moved to the United States. It’s a tough life,” he said. “I considered accepting Fedor Emelianenko’s offer and rematch him in Russia. I wanted an extra million dollars to do it, but they declined. My idea was to fight him again and then retire.”

Matched up against undisputed champion Cain Velasquez at UFC 188, which takes place June 13 at the Arena Ciudad de Mexico in Mexico City, the 37-year-old might hang up his gloves in 2016.

“I don’t think about leaving the sport anymore, but I do think about retiring,” he said. “I’m 37 now. I think about offering a rematch to Cain Velasquez after I beat him, and then retire.”

To fulfill his plans, Werdum has to get past Velasquez at UFC 188. After knocking out Mark Hunt to win the interim title in November, Werdum decided to again move his camp to Mexico.

Arriving in the country 35 days before the fight, Werdum brought with him the likes of Mauricio “Shogun” Rua, Renato “Babalu” Sobral, Cris Cyborg, Rafael Cordeiro and his brother, Felipe Werdum. Training at high altitude, Werdum expects Velasquez to gas within three rounds, and plans on shocking the MMA world one more time.

“I expect a different win. I want to surprise the entire world one more time, especially the doubters. It won’t be easy, though,” said Werdum, who sees Velasquez “100 percent physically, but not 100 percent mentally” ahead of UFC 188.

“In a perfect world, I see him trying to take me down. I land a front kick to the body or his face, or I submit him quickly after he takes me down,” he added. “In a more realistic scenario, I see him gassing after three or four rounds. People will be surprised. They are used to watching Velasquez with that non-stop rhythm, but he’s not used with high-altitude and hasn’t fought in two years. We’ll see.”