Michael Chandler: If I fought Will Brooks at Bellator 138, ‘I would have won hands down’ 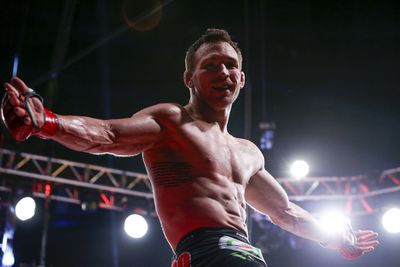 Michael Chandler steamrolled Derek Campos at Bellator 138, finishing him by submission in the first round. If it were lightweight champion Will Brooks standing across the cage, Chandler doesn’t think the result would have been much different.

“If I would have fought Will Brooks [last Friday], I would have won hands down,” Chandler told Ariel Helwani on Monday’s edition of The MMA Hour. “No ifs, ands or buts. I’m 100 percent confident in that.”

Before Friday night in St. Louis, Chandler, the former Bellator lightweight champ, had gone nearly two years without a victory. His last two losses came against Brooks. The first, in May 2014, was a very tight split decision that many thought Chandler won. In the most recent, Brooks finished Chandler by fourth-round TKO last November to win the vacant belt.

Chandler (13-3) said he is a different fighter now than he was eight months ago.

“Where I was at that point in time, mentally and physically as far as game plan and skills and just fighting a certain way, I wasn’t where I needed to be,” Chandler said.

Chandler, 29, started his career off a perfect 12-0, winning the belt from Eddie Alvarez in 2011 in one of the best fights in Bellator history. After two title defenses, Chandler dropped three straight. The first on that skid was a split decision against Alvarez, another bout that many had him winning.

Heading into the Campos fight, Chandler had not tasted victory in 688 days. That combined with the arena being near his hometown of High Ridge, Mo., made for what he called the biggest win of his career.

“People love to see a comeback story,” Chandler said. “People love to see somebody who was in a bad situation, who was down and out, down in a valley and came out and just persevered. That was the culmination of what it was the other night, of just kind of being down on myself, sometimes wondering how have I fallen from where I was to where I am now? And now just being able to build back up. It’s definitely an emotional situation. It’s awesome and I really do feel like I’m the best mixed martial artist I’ve ever been, more skilled than I’ve ever been and now I’m more confident than I’ve ever been.”

On top of those tweaks, Chandler sought the help of a psychologist, read books, watched motivational videos on YouTube and prayed.

“I felt like there was a calling on my life to get into this sport,” he said. “Somewhere along the way you can forget that. You can forget that this sport isn’t about me. It’s not about my wins and losses. It’s about the byproduct of the performances I put on and how I can touch people and reach people through what I’m doing. So that’s really what I’m focused on these days.”

It’s hard to imagine a better performance than the one against Campos in front of his hometown fans. Chandler boxed Campos up, dropped him with an overhand right and then finished the job with a rear-naked choke at 2:17 of the first round.

Chandler isn’t sure if he’ll get a title shot with the victory. A few other contenders have emerged during his losing streak. But that isn’t necessarily what matters to him right now.

“If it’s one more and then title, I’m happy with that,” Chandler said. “If it’s five more fights and the title, I’m willing to work my way up.

“I’ve had some losses, I’ve had some bad performances. But you’re not gonna stop me from knowing and thinking that I’m the best lightweight in the world. And I know I’m gonna get back to that.”

Maybe, more than anything, self-belief is what has improved the most from Chandler, the former University of Missouri All-American wrestler.

“There’s no doubt in my mind that I’m gonna have that title around my waist in the future,” he said.