‘Minotauro’ Nogueira: Fabricio Werdum has the edge over Cain Velasquez standing and on the ground 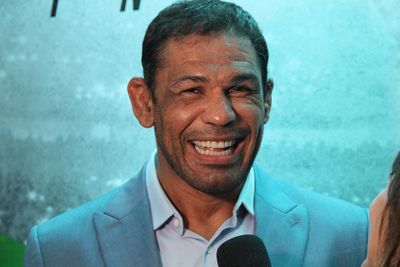 Speaking with journalists during the UFC 190 media day in Rio de Janeiro, Brazil, “Minotauro” broke down the unification bout, which takes place Saturday night in Mexico City. The Brazilian legend lost to Velasquez and is 1-1 against Werdum.

“Cain Velasquez attacks more, and throws more punches and kicks. It’s hard to fight against him,” Nogueira said. “He’s very athletic, you can see that from his fights with ‘Cigano’, but Werdum trains hard and is a great fighter.”

“The way to beat Cain can be with knees,” he said. “He’s tall and has a big reach, so kicks and knees might be good, and stay away from the fence and Cain’s wrestling. The way to win is avoid the wrestling match, exactly how Cain killed ‘Cigano’. (But) Werdum has the advantage standing and on the ground.”

The only blemish on Velasquez’s record is a 64-second knockout loss to Junior dos Santos, which he avenged twice in the Octagon. The Mexican-American was out with injuries for months prior to that bout, and again enters the cage to defend the title after a long layoff.

“The last time Velasquez was out so long was his first fight with ‘Cigano’, and ‘Cigano’ caught him,” Minotauro said. “It’s happening again this time, and that’s a factor.”