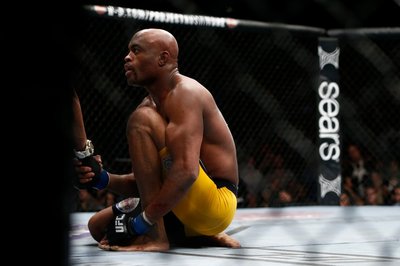 The man spent nearly half his UFC career fighting opponents who had failed some sort of screening for performance enhancing drugs during their career. Throughout his historic 16-0 UFC run from 2006 to 2012, Silva defeated four different men who would later fail their post-fight test.

Taking a spin at 205 pounds, Silva quickly dispatched James Irvin in 2008. Irvin would go on to test positive for the illegal substance trenbolone, developed as a veterinary steroid generally used for livestock to increase muscle growth and appetite.

A year later at UFC 101, Silva took Forrest Griffin on a tour of The Matrix. The TUF winner’s use of Xanax the night before did anything but enhance his performance.

Nearly putting Silva away at UFC 117 in 2010, Chael Sonnen would go on to fail his post-fight screening due to ‘abnormally high’ testosterone levels.

Finally, in what stands as Silva’s most recent victory, Stephan Bonnar tested positive for the anabolic steroid Drostanolone following UFC 153 in 2012.

Speaking with Mike Bohn of MMA Junkie, Silva says he’s more concerned with the image of the sport than with his own safety.

“When the guys test for the steroids, it’s bad because this is a problem. It’s bad not just for the UFC, but for the sport.”

Silva believes PED users don’t typically dabble in them and that offenders should be removed from the sport.

Despite that stance it appears Silva is willing to make an exception when it comes to Vitor Belfort. Belfort, who challenges middleweight champion Chris Weidman in February, has had his own set of issues with PEDs. Still, Silva told media Tuesday he’ll be cheering on the fellow Brazilian.

“With all my energy I’m going to be rooting for Vitor to win.”

‘I’m not going to apologize because I’m not sorry.’ Chael Sonnen discusses his failed drug tests. ‘I knew exactly what I was doing. This was a premeditated decision.’

‘Selecting another victim.’ Conor McGregor says he’ll fight again before a UFC featherweight title shot and that he and Zuffa brass are already lining up his next opponent.

From DMX to MVP to Vitor. Chuck Mindenhall recaps and breaks down Anderson Silva’s first (and last) media appearance before his fight with Nick Diaz.

‘I want to fight someone that isn’t afraid to stand up with me.’ Miesha Tate wants to slug it out with Bethe Correia after her last two opponents ‘just wanted to grab a hold and take it to the ground.’ ‘Let’s give the fans what they want to see and throw punches until someone goes down.’

Friday Finishes from Inside MMA.

Took a turn there.

Because Aldo’s body is weak and Mendes is 2foot nothing, they will not be ready to challenge me for the throne until mid next year.

Myself, Uncle Frank and the rest of La Familia are in the process of selecting another victim to eliminate in the meantime.

I demand all scared contenders bow before me and kiss each individual toe, in a public setting of my choice, for pardoning from execution.

.@TheNotoriousMMA says Defeat is the secret to success….let me help you be more successful kid! #SpeakUpDannyBoy

Not only would I grind @TheNotoriousMMA‘s face into mat, I’d whoop his ass on the Mic too!! #SoundOffSally #ICantHearYou !!

@AliPuncherKing @johnlineker @danawhite @ufc hows vacation treating you? Do you really wanna play this game? Ill give you one chance to stop

@AliPuncherKing @danawhite lol god your fucking stupid … Silly bitch go sit in the corner and think about what you did! #cheater

Got to work with the LVMPD today as a k9 decoy! I will also be volunteering for the LVMPD 24th annual… http://t.co/oZFQr1w5dw

Got a mole taken off by Dr Graham at the gym. Great guy and love having him @powermmafitness … http://t.co/a2yBkXQ1Ng pic.twitter.com/SVjKeCgUhj

Its been exactly 200 days since I’ve fought & still no fight in site?!? @MMAWorldSeries @SugarRaySefo #WillFight4Food #unemployment

Working out (having fun) with @robertoberst world strongest man @alexdiciero

Urijah Faber at Francisco Rivera at UFC 181: Hendricks vs. Lawler 2