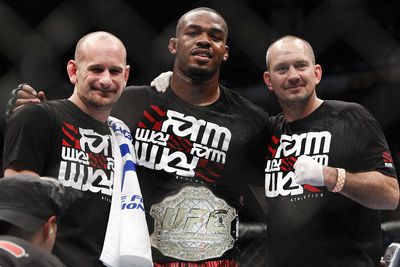 Coach Mike Winkeljohn has never been afraid to tell it like it is.

Jones was stripped of his title and suspended indefinitely following his arrest on felony hit-and-run charges in April.

“Jon is going to make the best of it,” Winkeljohn said. “He’s doing all the right things. He was in the gym helping Andrei Arlovski for his fight. He’s in the gym helping others right now. He’s gone back to help others, stopped doing those things that get you in trouble and go forward.

“I’m looking forward to Jon turning his life around and becoming a better person. Is he fighting again or not? I’m not sure. That’s not important. What is important right now is that Jon takes care of himself and his family.”

Describing Jones’ rapport with he and Greg Jackson as having remained ‘very good,’ Winkeljohn maintains again that Jones’ personal development is paramount to fighting.

“Oh yea,” said of the real possibility of Jon never fighting again. “To us, the most important thing is Jon Jones. Everybody seems to forget other things but at the end of the day it’s for Jon Jones to become the best person he can. The fighter is secondary. We lose sight of it. There’s a possibility that he might not fight. There’s a possibility that he might fight. I know right now he’s staying busy helping others in the gym. That’s very important.

“Jon’s just coming into the gym, doing his job. He’s just focused on helping others. That’s all I can say, all I will say. That’s the important part about it. I can’t dig into his emotions or tell you anything about him personally, but he’s there to help others which is very very important to us.”

With Jones’ removal from UFC 187 in May, former No. 1 contender Daniel Cormier stepped in to defeat Anthony Johnson to become the next light heavyweight champion.

While some have questioned the legitimacy of Cormier’s claim to the crown, Winkeljohn isn’t among them.

“He’s got the belt,” Winkeljohn said of Cormier. “That’s it. Jon was the champ, he’s no longer the champ. Daniel Cormier’s got the belt. I saw his fight with ‘Rumble’ and he deserves to be champion. He took a heck of a shot. They don’t come any tougher than that. Coming back, staying composed enough to slip under that punch and take [Johnson] down to go into his world. He deserves to be champion.

“Daniel Cormier has been nothing but respectful and courteous when I’ve talked to him, as has been ‘Rumble.’ These guys are great and there’s no reason to take that away from him. He’s a champ right now, a UFC champ. I wish him all the luck.”

With Cormier having the benefit of Velasquez’ help leading up to UFC 187 against Johnson, Winkeljohn was asked if he noticed any marked difference.

“I don’t think there was as much media involved with it,” Winkeljohn said of Cormier’s match with Johnson. “A little bit less emotion, but Daniel still does the same things that he did with Jon and that we had scouted. He doesn’t look a lot different in this fight [with Johnson]. He was successful in the same things, it’s just that ‘Rumble’ throws different things.

“[Johnson’s] just a different fighter so I think Daniel was the same guy he was when he fought Jon. I’m not sure what changes he made. He looks like the same guy. He’s very good at what he does.”

H-Bomb. After first-round KO win, 44-year-old Dan Henderson has no plans for retirement.

‘I’ll put him down, raise the belt and boom.’ Conor McGregor’s UFC 189 World Tour antics were part of a carefully crafted plan. ‘I was just mimicking what will happen July 11 in Las Vegas.’

‘I think Andrei Arlovski and I should dance.’ Ben Rothwell wants a shot at the former UFC heavyweight champion after submitting Matt Mitrione in New Orleans.

Hanging it up. After 70 pro MMA fights, UFC vet Brian Ebersole retires following this weekend’s TKO injury loss. ‘Lifetime of wrestling takes a toll on you, getting your head pulled, knees banged up – I’m going to leave it to the young guys now. That’s it for me.’

All 30 seconds of Tim Boetsch vs. Dan Henderson.

Knuckle Up #362: UFC Fight Night of the Long Knives

See how the pros reacted to UFC Fight Night: Boetsch vs. Henderson.

Well that felt good!! Thanks to everyone for supporting me. Time to celebrate on Bourbon S… http://t.co/K1YIi1ECly pic.twitter.com/VZwNtQ4r0j

‘ @arielhelwani GoGo choke and it was very deep. Everyone talking shit has never been put it one period

Got my 10th win in the UFC tonight!! Thank you all for the support!

Thank you Master Renato! I hear your in my city tonight?! https://t.co/9MMwvukgnL

Thank you #NewOrleans @ufc but it’s time go home to My Little ones what and amazing night… https://t.co/Q910gi5dbF

Action shot from last night. Thanks again for all of the support !! Thanks NOLA it’s been real…. https://t.co/IVd8DvA0Sy

Just wanna thank @ufc for the opportunity. Thank u to my sponsors, coaches, training partners, & to a tough sob @ricardodemente! Way to work

What an F’n disaster. I’m so disappointedi can’t even express it. A F’n shot? WTF? I felt great. Slick and dangerous. Then I do that.

I Just want say Thank you, guys suport me for ALL, ALL friends And people who believe in my job.
I give my best.
I always say, when i Fight inside the octogon, I Really come to fight, to finish my oponents, And give the best show for you guys. Sometimes, shit happens … And I lost ..
But … I will keep going …

Time for me to take a new role in this sport/industry. One more suited to my age!!!… http://t.co/IbTd1ylkgK

Cool clip from the fight. Good to see my hands improving ! Now time to get back to some wrestling … https://t.co/P9rgPBdr2c

What do I need to do to get a bonus

on your win last night. I’m so happy for you brother

He did. He just retired. https://t.co/wffrg5M4Kh