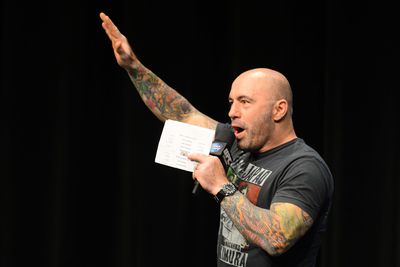 For some of us, the highlight of Friday night was FOX Sport’s Katie Nolan combating trolls for calling the Bellator 138 main event between Ken Shamrock and Kimbo Slice, ‘fixed.’

Well, she wasn’t the only one who thought the grudge match looked ‘fake.’

“That fight looked fake as f**k,” Rogan said Saturday morning on his ‘Fight Companion’ podcast alongside UFC heavyweight Brendan Schaub. “There’s a couple things I don’t like about that fight. I don’t like that clinch. That long clinch that they had when they were mouth to ear. They were mouth to each other’s ears for a long f***ing time.

Schaub pointed out that Shamrock is, in fact, 51 years-old, but Rogan still had some issues.

“But they might have told them that this is the way to generate interest in this fight. To hype it up. All the fake bad blood.”

After surviving a rear-naked choke attempt from Shamrock, Slice scored a first-round TKO of the UFC Hall of Famer. Rogan didn’t take issue with the stoppage.

“The other thing that got me was the way Kimbo stopped Shamrock,” said Rogan. “That was real as f**k. I mean he definitely cracked him. So maybe they made an agreement and Kimbo said, ‘I’m gonna punch this motherf***er anyway.'”

“[Shamrock] never went behind the head,” Rogan said of the choke attempt. “He choked [Slice] but he had it like on top of the head in some sort of weird way.

“It was disturbing to me how easy Kimbo shook Ken off his back. There was a lot of s**t I didn’t like about it.”

‘She is simply the best for me.’ UFC strawweight champion Joanna Jedrzejczyk says she ‘wants to be Ronda Rousey in the strawweight division.’

‘The best way to recover is to get another fight.’ Lyoto Machida explains why he wanted a quick turnaround after losing to Luke Rockhold.

‘Finally, I’m getting the respect that I deserve.’ Rafael dos Anjos talks about life as a UFC champion, his injury rehab, fighting Donald Cerrone again, another fight with Khabib Nurmagomedov and more.

No ‘monsters.’ Tatsuya Kawajiri says he ‘might be able to win the UFC featherweight title’ with the promotion’s new drug-testing policy.

[More highlights in her backstage interview]

Not sure I agree with all of these. No Ronda?

See how the pros reacted to Joanna Jedrzejczyk vs. Jessica Penne.

I think I stopped Japanese UFC Fighter losing streak this year, begins his fighter strikes drug tests too harshly, and, from July.
Where’s my next game-? Japan?
I now want to go in the United States! My next fight is where the good?

I feel like Robinhood, i told people to bet on a first round to win some easy money now i get messages that thanks for the tip!

I just wanna thank my brother @RogerHuerta for everything you’ve done for me. Non of this would be possible without you bro.

getting your hand raised is an amazing feeling @ufc #ufcberlin https://t.co/Js3EMoVoul

What a night!! Thank you to Antonio Dos Santos for sharing the cage with me! He is a gent and… https://t.co/npc8SiVzSt

Thanks for coming out to Berlin. Special thanks to my fans, family, friends, team members and sponsors, for… http://t.co/ZUYpoPjkax

.@UriahHallMMA I know you don’t mean the hair. Besides, I don’t know how to loose…feel free to try and prove me wrong…

rondarousey@BetheCorreia, your disrespect to my father, family and friends is not forgotten. I am your comeuppance. And this will not be over quickly. I will make sure you feel every moment of the lesson I’m going to teach you.
#UFC190 #Aug1st #andSTILL

@BetheCorreia, your disrespect to my father, family and friends is not forgotten. I am your comeuppance. And this will not be over quickly. I will make sure you feel every moment of the lesson I’m going to teach you. #UFC190 #Aug1st #andSTILL

I want my shot. pic.twitter.com/s1GsSqk4wg