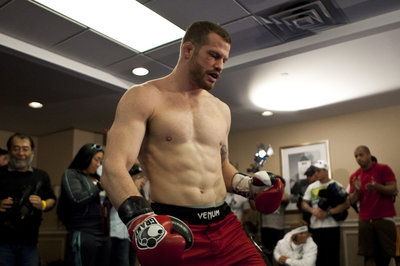 Former Strikeforce champion Nate Marquardt is returning to the division he competed in for a majority of his career, and he’ll do so at the UFC’s first ever trip to New Zealand this summer.

Marquardt is scheduled to fight former 205-pounder James Te Huna in the main event of UFC Fight Night 43, which will take place on June 28, 2014.

UFC officials announced the bout on Monday, following an initial report by The MMA Corner.

The 34-year-old viciously knocked out Tyron Woodley to capture the vacant Strikeforce welterweight title in his 170-pound debut, but went on to lose his next three contests, including back-to-back first-round KO losses to Jake Ellenberger and Hector Lombard.

He’ll look to right his ship against Te Huna (16-7), a New Zealand native who’ll be looking to snap his own slump when he makes his 185-pound debut.

The 32-year-old is currently the No. 14 ranked light heavyweight in the UFC, but like Marquardt, has been finished inside the first round in consecutive bouts — first by a Glover Teixeira guillotine, then by a ferocious Shogun Rua knockout.

UFC Fight Night 43 is expected be held at the Vector Arena in Auckland, New Zealand.