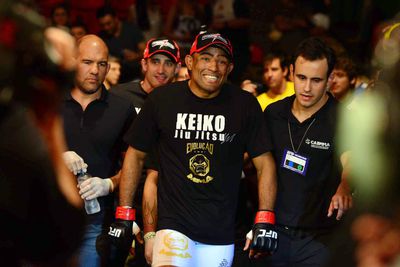 Sergio Moraes is again sidelined with an injury.

The Brazilian grappler, who spent 617 days outside the Octagon with a severe knee injury, was forced out of an upcoming UFC Fight Night 69 bout with Peter Sobotta on June 20 in Berlin. The promotion announced on Tuesday that Sobotta will now face UFC newcomer Steven Kennedy.

Moraes told MMAFighting.com he suffered a spine injury, but it won’t require surgery.

Sobotta (14-4-1), who went 0-3 in his first UFC run in 2009 and 2010, defeated Paweł Pawlak via unanimous decision in his return to the Octagon in May of 2014. He was expected to return in April against Moraes, but was forced out of the UFC Fight Night 64 card with an injury.

Kennedy (17-6) signs with the UFC after racking up seven straight victories in Australia, five via stoppage. The welterweight fighter will compete outside of Australia for the first time in his professional MMA career.

Headlined by Joanna Jedrzejczyk vs. Jessica Penne for the strawweight championship, UFC Fight Night 69 takes place at the 02 World Arena in Berlin, Germany.