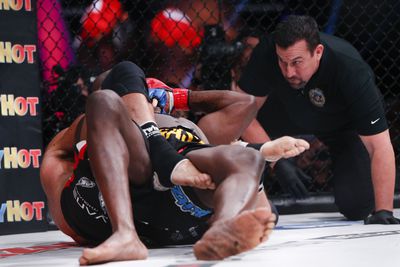 Did Kimbo Slice tap out before eventually finishing Ken Shamrock with a right hand on Friday night? Referee John McCarthy believes he did not.

McCarthy told MMAFighting.com’s Ariel Helwani that he and Slice spoke about a potential tap backstage before Bellator 138 in St. Louis. Referees meet with fighters for rules meetings before the event and during that conversation Slice told McCarthy he would not tap.

“So, I went over what would make me stop the fight,” McCarthy said.

What Slice did, putting both hands to the floor in a near-tap while Shamrock had him in a rear-naked choke, did not fit the criteria of what McCarthy and Slice discussed, the godfather of MMA referees said. Many pundits online posted the gif of the sequence and came to the conclusion that he tapped out. Not so, McCarthy said.

“His hands came out during the choke, but he would have had to have made more of a continuous motion for me to say he was tapping,” McCarthy said. “In my opinion, that was a fighter contemplating tapping and then working through it.”

Slice, 41, ended up scrambling out of the choke and getting to his feet. Seconds later, the former YouTube viral video street fighter had Shamrock on his back after a vicious right hand to the forehead. At that point, McCarthy rightly called the fight in favor of Slice by TKO.

Slice (5-2) earned his first MMA win since 2009 when he defeated Houston Alexander in the UFC. It was his first fight since 2010. Shamrock (28-16-2), who like McCarthy was involved in the early UFCs, also had not fought since 2010, the year in which he got his last victory.