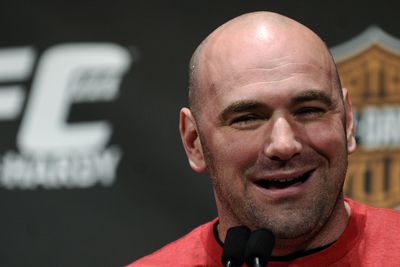 It’s safe to assume that Ultimate Fighting Championship (UFC) President Dana White has had a terrible, chaotic day after reports surfaced (read all about it here) earlier this afternoon that Featherweight champion, Jose Aldo, suffered a broken rib training for his upcoming monster match against Conor McGregor.

That’s because UFC has spent “more money promoting this fight than we have ever spent on any fight in history,” including a 10-day, eight-city “World Tour” that started in Rio de Janeiro, Brazil, and ended in Dublin, Ireland.

It was utterly bananas.

With “Scarface” and his team likely now weighing all their options, including fighting through the injury, seeking second medical opinions, meeting with UFC brass and/or postponing the match up to a later date, White today issued the following statement to freaked-out fans:

Easier said than done — UFC 189, which takes place on July 11, 2015, inside MGM Grand Garden Arena in Las Vegas, Nevada, was one of the most anticipated pay-per-view (PPV) events in recent memory.

In fact, White even compared it to boxing’s Floyd Mayweather vs. Manny Pacquiao blockbuster bout, while the brash Irishman predicted it would smash “all box office records.”

With so much invested — financially and emotionally — it would seem unlikely that UFC would possibly risk replacing Aldo in UFC 189’s main event. If he is unable to go, Robbie Lawler vs. Rory MacDonald would seemingly be promoted to the main event and Aldo and McGregor would have more time — and ammunition — to continue promoting their insane grudge match for a later date this summer.

UFC nor Aldo has made an official statement at this time. And McGregor has remained uncharacteristically quiet on social media as we all, collectively, try and “relax.”