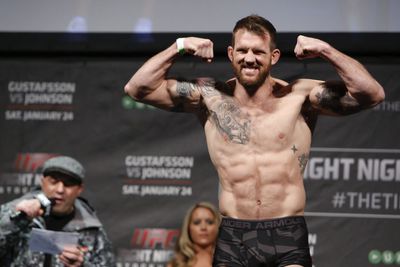 Not only does Ryan Bader think he deserves a title shot more than Alexander Gustafsson right now, he also believes that he’d be a tougher opponent for Daniel Cormier.

Bader, who has won four in a row, seemed like a cinch to earn that light heavyweight opportunity against Cormier until the UFC pulled a swerve last week. Dana White told FOX Sports 1 that Gustafsson was going to be next in line, not Bader.

“I thought I matched up really well with Cormier and [could] give him problems that other people haven’t,” Bader told Ariel Helwani on Monday’s edition of The MMA Hour. “I think he can go in there and beat Gus and use his wrestling. I definitely felt that I was the more dangerous fight, for sure.”

Before White came out with the news on TV, Bader called the boss and pled his case. “Darth” has wins over ranked fighters Ovince Saint Preux and Rafael Cavalcante and, most recently, elite light heavyweight Phil Davis, who just departed the UFC for Bellator after a successful run.

Gustafsson, meanwhile, was knocked out by Anthony Johnson in the first round at UFC on FOX 14 in January. Cormier beat Johnson by third-round submission last month at UFC 187.

“Gus is a great fighter,” Bader said. “He’s awesome. But he just doesn’t deserve that shot right now coming off of a loss like that.”

Bader (19-4) has the résumé to earn a title shot and also did enough outside the Octagon to build the fight with Cormier. The two went back and forth on social media and interviews leading into Cormier’s fight with Johnson for the vacant title. In the post-fight press conference after Cormier’s win, Cormier ripped into Bader, who was in the back of the room. Bader approached the dais and the two had to be separated.

All of those things added up would usually get a UFC fighter a title shot. Not this time.

Bader, 32, was supposed to fight Cormier in the main event UFC Fight Night 68 last weekend in New Orleans. But when Jon Jones was arrested on a felony charge and stripped of the title, Cormier was inserted into the UFC 187 main event against Johnson in Jones’ place.

“We were supposed to fight already,” Bader said. “I was good enough to fight him then. Why not now? That’s kind of how I’m looking at it. You never know, but my team and I definitely thought we had that. It’s disappointing, but I’m not gonna sit here and cry about it. I’m just gonna go out and do more.”

Part of the Ultimate Fighter alum wishes he had just fought another opponent in New Orleans, because now he’ll likely have to wait for September or October to compete again. The UFC is targeting a bout between Bader and Rashad Evans, who is coming back from two knee surgeries.

“I do wish I took a fight,” Bader said. “That being said, title shots don’t come around that often. We took that chance seeing if we could get that. It kind of backfired. We’re in a good position now regardless.”

Maybe if Bader had finished Davis in Sweden back in January he’d have locked up the title shot. Maybe even if it were a more exciting fight. Bader thinks his wrestling style could be holding him back somewhat. Gustafsson is an exciting striker with multiple knockouts — and a classic against Jones — on his record.

“Do I understand?” Bader said. “Kind of. But going forward do I go out there and not use what I’m the best at, usually wrestling? Do I go out there and stand and bang with everybody and have those fights now? Is that what they want? I know people want to see that, but is that gonna get you the title shot even coming off losses and everything? It kind of puts you as a fighter in a weird little place. Winning is everything to us, but at the same time you’ve gotta have exciting fights and keep pushing it in that way.”

Bader believes beating someone like Evans will leave the UFC no choice. They’ll have to give him a title shot after that. Then again, he felt the same way before Gustafsson leaped over him last week.