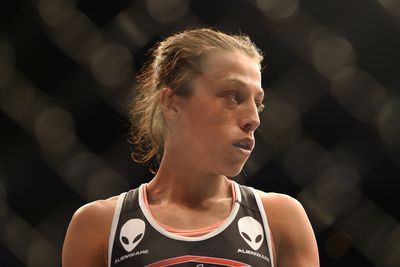 But, two days removed from the first-ever title bout to be featured on UFC Fight Pass, Jedrzejczyk’s co-manager Shu Hirata informed The MMA Hour’s Ariel Helwani that the 115-pound champion suffered a badly broken thumb during the fight that could potentially require surgery to fix.

It’s unclear when the Polish striker suffered the unfortunate injury. Though it likely came after landing one of the many punches she connected on Penne’s face (see the carnage here) en route to her third-round technical knockout victory.

The win not only gave Jedrzejczyk her tenth in a row (four inside the Octagon) it also earned her Ronda Rousey’s respect and admiration The rewards, however, came at the expense of an injury that could potentially sideline the champion for a significant amount of time.

Until then, the next No. 1 contender could be sorted out, as there are plenty of talented 115-pound females ready to earn their next shot at the title. Among them is former Invicta FC champion Michelle Waterson, who takes on Angela Magana on July 12, 2015, at The Ultimate Fighter (TUF) 21 Finale.

Also, former World Series of Fighting (WSOF) champion, Jessica Aguilar, looks to make her case for a championship fight when she battles Claudia Gadelha at UFC 190 on Aug., 1, 2015 (details).

Indeed, the list of possible contenders is long. Jedrzejczyk’s recovery, hopefully, is the opposite.