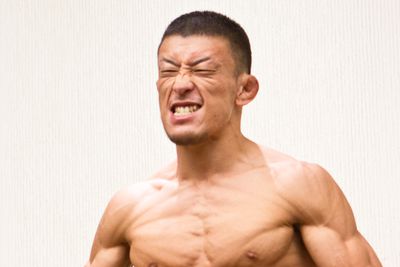 Tatsuya Kawajiri went from thinking he might be released to realizing he could still be UFC champion.

The Japanese fan favorite said after his unanimous decision win over Dennis Siver at UFC Fight Night: Jedrzejczyk vs. Penne on Saturday in Berlin that he believes he could become UFC champion once the organization’s new drug-testing policies begin next month.

“I heard from July that the drug-testing policy is going to be very strict,” Kawajiri said at the post-fight press conference. “So I think [without] those monsters of fighters in the UFC who may have had a problem with these things, I may be able to win this division now.”

Beginning July 1, the U.S. Anti-Doping Agency (USADA) will oversee sweeping changes to the UFC’s drug policy. The highlights of the new regulations will be random, out-of-competition drug tests for every single fighter on the roster multiple times per year. Also, discipline for fighters caught using banned subtances will be ramped up.

Kawajiri (34-8-2) definitely doesn’t seem to be worried. Maybe the 37-year-old really does have another run in him. Siver came in ranked No. 12 among UFC featherweight contenders. It was hardly a highlight-reel victory, but Kawajiri got the job done, holding Siver down in the second and third rounds after Siver (22-11) won the first round.

“I signed with the UFC for one reason, which was to become the featherweight champion,” Kawajiri said.

Overall, Kawajiri has won seven of his last eight fights. He only has three losses since 2008, to Clay Guida, Gilbert Melendez and Shinya Aoki. Kawajiri owns wins over Josh Thomson and Yves Edwards. He’s been a pro MMA fighter since 2000, but was only signed by the UFC last year after a successful run with DREAM.

Had Kawajiri lost, though, it would have been his second in a row. He was coming off a unanimous decision defeat against Clay Guida in April 2014. Kawajiri thought he would have been cut if he lost to Siver.

“I thought this was going to be a survival fight, because I expected to get released if I lose,” Kawajiri said. “If I lose, then I thought my career as a fighter would be finished.”

Not so. Instead, he’ll try to gear up for one last title run, perhaps sponsored by USADA.