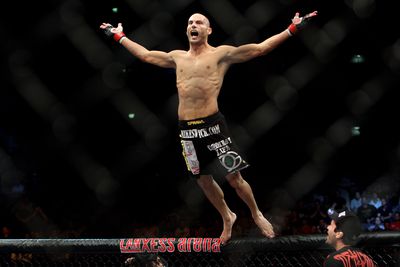 Mike Swick was on top of the world, considered one of the best fighters at 170 pounds. He returns to the place he once called home on July 11, 2015, after a two-year absence to take on Tristar Gym prospect Alex Garcia at MGM Grand Garden Arena in Las Vegas, Nevada.

When former Ultimate Fighting Championship (UFC) Welterweight contender Mike Swick returns to his old stomping grounds in the dry, desert air of Las Vegas, Nevada, for the promotion’s summer blockbuster UFC 189, which takes place at MGM Grand Garden Arena on July 11, 2015, he will find a much more different climate and roster of explosive talent than when he previously roamed the 170-pound kingdom.

After knee and stomach issues ravaged a promising run toward the top, Swick took off for Thailand to take on a different kind of project: Opening a brand-new, fighting oasis that is the American Kickboxing Academy (AKA) of Phuket. While more than 8,000 miles away from family and friends, the soon-to-be 36-year-old brought a one-of-a-kind mixed martial arts (MMA) and fitness training facility to a combat-centric region.

At the same time, Swick watched teammates back at his former case camp of AKA San Diego build upon their Octagon resumes, with some earning title shots and others strapping gold around their waists altogether.

“This is the most successful team in the history of MMA and I am so proud to have been a part of it since the beginning,” says Swick.

Daniel Cormier, who was just an unpolished Olympic wrestler-turned fighter back when Swick was part of the 170-pound elite, made good on his second title shot, besting Blackzilian bomber Anthony Johnson at UFC 187 for the Light Heavyweight championship. Luke Rockhold, who had yet to win the Strikeforce Middleweight title when Swick notched his fourth-straight win in summer 2009, is now going to challenge the undefeated UFC champion Chris Weidman later this year.

When Swick meets potent Tristar Gym standout Alex Garcia next month, he will have gone 945 days without competing in an MMA fight. After sitting out of the sport to fulfill a dream he mapped out on a napkin at his mother’s house in Texas four years ago, his focus is solely set on fighting.

“My mindset is focused on going out there and actually enjoying what I do,” Swick says. “Six months ago I was retired in my mind and now this, fighting on the biggest card of the year at the MGM Grand. I will fight every fight like it’s my last now. You never know and I won’t have anymore regrets.”

Garcia is coming off of a loss and is 2-1 in his short UFC career. “Dominican Nightmare” punishes foes and is a very formidable striker. Though somewhat short for the 170-pound division, Garcia makes up for what he lacks in height and reach, in power and angles.

His timing is also another important aspect of his game. The 27-year-old is a pretty darn good counter striker, but he is also skilled on the mat.

“My strategy is to be an athlete and outwork him,” Swick says. “I assume he will be looking to take me down so I am working diligently on that. I feel my ground [game] is better than his and he can’t match my speed, reach, movement or striking on the feet.”

Swick is expecting a knock-down, drag-out kind of battle when it is time to make the walk to the cage in “Sin City.” Both he and Garcia have gone the distance before in their respective careers and have shown that pace is not much of a problem for them.

Swick is a UFC fighter right now, but he has always thought about life after fighting.

While some fighters take time to dabble in acting or commentary, Swick chose to pursue a different kind of career, one where he would be able to forge unbreakable bonds and help others. Swick has held MMA seminars on the island of Phuket since 2007, so opening up a first-rate fight camp was a no-brainer.

“I am always thinking about the future. You can only fight for so long and you are only relevant as a fighter for so long,” says Swick. “You have to maximize on what opportunities you have when you get them. Every day that passes is a day you will never get back. I have big plans and only so much time.”

Swick has been living full-time in Thailand for the last few years while the gym was being constructed. In the midst of opening up his gym, he had declared himself unofficially retired.

Numerous health problems multiplied between the years 2010-2011, including stomach issues and a knee injury. Just as quickly as he believed his UFC career was back on track, following a second-round technical knockout of DeMarques Johnson, Swick was stopped by a game Matt Brown at UFC on Fox 5 in Dec. 2012.

“There was no plan to [return] initially. I assumed I was done after UFC on FOX 4 and 5,” Swick claims. “Both were not good performances and my health was not good. I assumed I would never heal. I think moving on and accepting that is what healed me somehow. I have no other explanation.

I just know I am healed now and can eat again and feel great. After a recent trip back home, for the birth of my second daughter, I trained at AKA with the guys and I knew I was back and it’s time to fight again.”

Although Swick is at an age and point in his career where fighters tend to decline, which is not always the case with men such as Cormier or Urijah Faber and countless others, he feels he still has what it takes to compete.

No pressure and no injuries heading into his first Octagon tussle in more than 2.5 years with Garcia, only good vibes, says Swick. He has produced a documentary series titled “The Comeback” on the AKA Thailand YouTube channel, which illustrates life there, monkey attacks and preparation with coaches like Adrian Shead and fighters Marlon Sandro and Leonardo Santos.

“This has been a dream camp and I am in the best shape of my life. I am hoping to mix it up a bit and have some fun,” Swick says. “I wanna get tired and have to push. Make it a grind and painful and then finish dominantly. If it gets into a dog fight, I am gonna make sure to grind him down.”