The thing about Dan Henderson is…well, Hendo’s going to Hendo 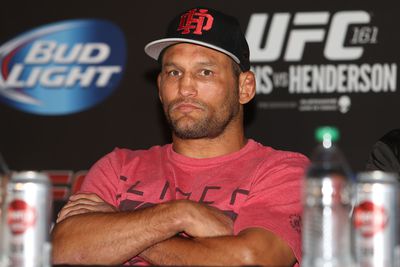 At 44 years old, Dan Henderson won’t be the oldest cat to step in the cage this month with the express purpose of purging a man of his consciousness. That honor belongs to Ken Shamrock, who at 51 is defying everything (protests, common sense, gravity) in his quest to purge the world of Kimbo Slice.

Difference is Henderson has fought ten times since Shamrock last did in 2010, and was treated ruthlessly in most. Shamrock’s return feels like a wild hair up his keister, just some crazy dad sh*t, while Hendo’s is…is winceable a word? Henderson still feels there are miles to go before he sleeps as he calibrates his overhand right to blow-up Tim Boetsch. If there’s anything he hates worse than forced displays of pre-fight emotion, it’s that pesky word “retirement.”

(And for the last time, if Henderson is headed for the glue factory, he’s going to damn well drive himself. Nobody tells Hendo what to do. Nobody).

Now, it’s possible that Henderson knows something that we don’t. It’s possible that his last fight with Gegard Mousasi was indeed stopped a little prematurely, and that even with one seeing eye he was about to turn the tables like he did with Shogun and force the UFC to dole out $50,000 in bonus money. It’s possible.

Based on the evidence, the probability was that Henderson was seconds away from losing anyway, and that referee Leon Roberts is above all things a merciful man. And really, even if you give Henderson the benefit of the doubt on that fight out in Stockholm, the previous one with Daniel Cormier can’t help but linger in the air. After all, that’s where Henderson was being flung through for nearly three full rounds. He was just a Rottweiler’s chew toy at UFC 173. There were no asterisks on that one; just lessons in aerodynamics.

That was his first fight off of TRT.

It doesn’t help that those fights came after he’d been knocked out by Vitor Belfort and nearly extinguished against Mauricio Rua before dropping a Hail Mary on him in the third round. Those happened while he was still on TRT. The calls for his retirement had already started to pick up steam going all the way back to when he was 42. Someday, when a biographer sits down to write Henderson’s story, there will be a lot of “why’d you do that?” moments to try and figure out. Why’d you go to Strikeforce? Why’d you fight into your mid-40s? Why’d you take those goofy pictures with your front teeth out?

(Tip for that biographer: Henderson is going to do what he damn well wants. Ain’t you or nobody going to tell him otherwise).

So that brings us to Saturday main event with Boetsch, who is perhaps the least menacing opponent Henderson has faced since a past-his-prime Renato Sobral five years ago in Strikeforce. Don’t think a 1-5 record over the last three years and a reckless habit of standing in the pocket are a perfect fit for a main event? Hendo cares what you think. He’ll try and put Boetsch’s head on a swivel, like he did against Michael Bisping at UFC 100, back when he was 39.

If he loses? If he gets knocked out? If he wades in squinting like he does to land the overhand and gets clipped by the Barbarian’s meat hook in the process? Believe it or not, those dour thoughts go into the total drama of UFC Fight Night 68’s headliner in New Orleans. Perhaps that is the only drama. The fate of a 44-year old man with a storied and stubborn career that has seen him through every port on the map wearing many belts (sometimes simultaneously).

People will tune-in to see the punctuation marks at the end of his career.

But if he wins? If he knocks Boetsch out, like he did Bisping, and Sobral, and Fedor, and Wanderlei Silva, and poor Crezio de Souza all the way back in 1997 when he was just 27 and still wore wrestling shoes? Well, you know what that will mean. Henderson will fight on. It’s in his Walla Walla blood. He will honor his contract, which he believes has three fights left on it. He’ll fight at 45 years old. And possibly 46. Possibly beyond.

In either case, Hendo is going to do what he damn well pleases. That’s how he’s always operated, and no additional scattering of wits — either his or otherwise — is going to persuade him from marching to the beat of his own drum. There’s something admirable about all that.

But if he can’t get his head out of the way of a big Tim Boetsch bomb, if he gets rocked and dropped and still comes back to compete and/or win, well — let’s just say admirable from winceable will look a lot alike.