Timofey Nastyukhin defeats Yusuke Kawanago at ONE: ‘Dynasty Of Champions’ 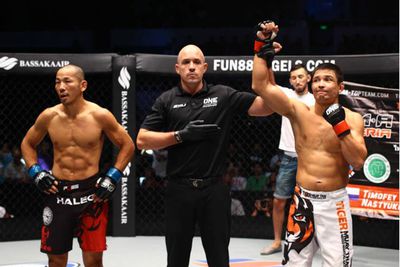 Asia’s largest and the world’s most exciting mixed martial arts (MMA) organization, ONE Championship (ONE), made a triumphant debut in Guangzhou, China, with yet another spectacular evening of world-class competition. ONE: “Dynasty of Champions” delighted fans with a night of heart-thumping action, as the best fighters from all across China and the entire world battled inside the ONE cage.

In the main event, Russian fighter Timofey Nastyukhin defeated Yusuke Kawanago from Japan, boosting his record to a 9-1. Huang Di Yuan also became winner of the ONE Guangzhou Featherweight Tournament after defeating Ma Jia Wen via unanimous decision while Wu Ze took home the win against Yang Jian Bing and became the champion of the ONE Guangzhou Flyweight Tournament.

ONE: ‘Dynasty of Champions’ (Guangzhou) Results:

MAIN EVENT Featherweight bout: Timofey Nastyukhin defeats Yusuke Kawanago by TKO (referee stoppage due to strikes) at 1:32 minutes of round 1