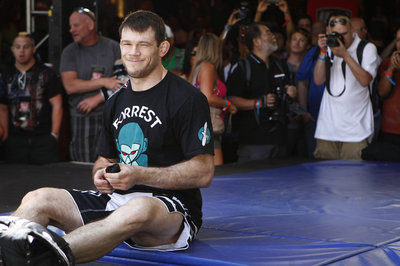 Come watch video of Jessica Penne hitting a triangle during tryouts, and some other behind-the-scenes action from the TUF 20 tryouts, including photos and tweets.

By far the best and longest behind-the-scenes TUF 20 tryouts video I’ve seen. Here’s a gif of Jessica Penne’s triangle or skip to about 11:02

Highlights from the video (all TUF tryout hopefuls in bold)

Most impressive to me today were Penne and Daly, but there is lots of talent available for this season. Gonna be a good one.

Other articles and videos

MMAJunkie shot a quick behind the scenes video

Wombat Sports has interviews with most of the girls trying out, such as Lisa Ellis, Heather Jo Clark, Danielle Taylor, Aisling Daly and many more.

So Dana said I’m like the girl out of pitch perfect…I said who fat Amy?? …I know exactly who he meant tho ☺️ #PitchPerfect #TUF20

Carla and Felice even train inside the hotel!

And the rest of the girls already casted, Tecia Torres and Emily Kagan

Selfie time! Missing my fav lil Asian @bebelaced =) “I will cuddle you so hard.” Xoxo pic.twitter.com/aY5Ddcrx3M

Sometimes “girlie” is ok. Fun to have my face done! pic.twitter.com/UOEyIJon2F

Ok, one more Felice, cause I know the hardcore WMMA fans need it

Jenny Liou is quickly become a favorite of mine (again, Dana was given out $100 per sub, if you were wondering)

Another TUF hopeful, Justine Kish, showing off her Russian-y spy side

Snooping in on @seanshelby interview for #TUF20. Maybe he is saying some good things about me! pic.twitter.com/ifu0LMBDoO

Joanne Calderwood doing her MMA hour interview at the tryouts: “Sittin in the corner at the TUF tryouts talking to @arielhelwani I’m so excited and wanted to be on the mats #mmahour #arielhelwani #tuf20 #tuf20tryouts”

Carla Esparza as she touched down in Vegas : “Landed! Brought my own in flight snack, @OatmegaBar protein cookies omnomnom!! #TUF20 #UFC”

Tecia Torres got girly in Vegas: “A lil vegas shopping & sight seeing with the girls. “

Last, but not least MMAFighting/SBNation’s own (Bloody Elbow is part of SB Nation, so technically she’s also our own!) Esther Lin aka The Almond Thief aka We Use A LOT Of Her Photos.

Hey! You said I could have some

Oh, and here’s a close up of Dana White with a hat + media scrum

0:14 Confirms the removal of “one that didn’t speak English”, Juliana Lima, “one couldn’t make the weight”, Claudia Gadelha and “one was too young”, Paige Van Zant.

0:22 They need 8 more girls and two alternates… Dana put an emphasis on wanting girls with experience, which is great news for MMA purists and veterans, such as Lisa Ellis, Jessica Penne and Aisling Daly that they won’t be passed over for fighter “x” with a “great for TV personality”

1:00 Gadelha, Van Zant, Lima are signed with the UFC… hopefully they don’t fight, at the earliest, on the prelims of whenever the champ is crowned. I’d just rather the UFC let them all get a fight in Invicta or whatever in the meantime.

2:40 Is Dana sold on the women? “I’m beyond sold. How far they’ve come in such a short amount of time. If you look back in women’s boxing when it came out, you had a ton of girls that were just going there with absolutely no defence, throwing a bunch of haymakers and windmills. These girls [in MMA] are good. Very technical, very talented, and it’s exciting.“

4:34 September 10th, people. That’s the premiere date of The Ultimate Fighter Season 20… I’m curious what they’ll call it. I think they’d be underplaying the significance of this season if they just went with “Pettis vs. Melendez”.