Tweets of the Day: Former UFC champ Carla Esparza to have shoulder surgery, out 6-8 months 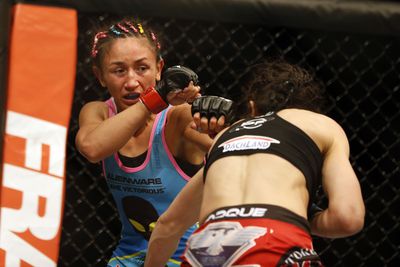 Former UFC strawweight champion Carla Esparza will be out much longer and will have to undergo shoulder surgery.

Carla Esparza isn’t having a very good 2015. After having an incredible 2014 where she beat 4 talented strawweights at TUF 20 to be the inaugural 115 lb champion of the UFC, she has suffered tough setbacks on the following months. She was completely dominated by the current champion in Joanna Jedrzejczyk last March, and now she will have to spend an extended period on the sidelines due to injury.

I will be undergoing surgery as a result of a shoulder injury from my last fight. I will be out6-8months. http://t.co/1gtL5dS6y4

Thanks everyone, I’m really sad, but this will by no means bring me down. I will be back:)

According to Esparza, the injury was originally from her bout against Jedrzejczyk last March. Following the contest, she looked to rest and rehab the shoulder thinking she wouldn’t be required to go under the knife, only to eventually learn that it indeed needed surgery.

The former Invicta champion is still ranked as the #1 contender at 115 lbs, but she will now likely be out at least until early to mid 2016.