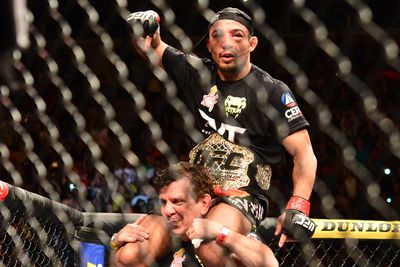 A look at the big July 11th UFC 189 pay-per-view in Las Vegas, where Jose Aldo and Conor McGregor will compete for Aldo’s featherweight title.

Normally on Sundays, the fight card post gives us a look ahead to the next UFC show. But because next Saturday’s UFC Fight Night headlined by Lyoto Machida and Yoel Romero is still a mess with the visa issues and there will be another fight added to the card, there’s no point in publishing an incomplete fight card today.

A card that is completed, though? UFC 189. Jose Aldo and Conor McGregor have had the heavy promotional push, and deservedly so. It’s the biggest fight in MMA featherweight history and it’s perhaps the most anticipated showdown of 2015. In the co-main is a welterweight title fight between new champion Robbie Lawler and challenger Rory MacDonald, a rematch of their 2013 bout which ended in a Lawler split decision over 3 rounds.

Here’s the full bout order for the July 11th event at the MGM Grand in Las Vegas: